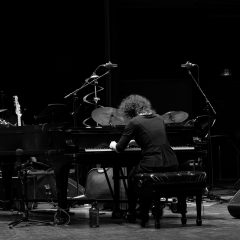 IICSI’s Improviser-in-Residence 2019 – 2020 project was one of the largest and most ambitious we have ever mounted.  Montreal’s Marianne Trudel, the talented pianist, composer, arranger, and improviser, worked with three of Guelph’s inspired ensembles–The Guelph Symphony Orchestra (GSO), the Guelph Gryphon Singers, and the Guelph Youth Jazz Ensemble—to produce a moving 10-part work entitled At the Heart of Silence:  Light (Manifesto for a Quieter Soundtrack).  The conductors of each of these ensembles are legends in their own right:  Judith Yan, guest conductor for the GSO, Marta McCarthy, conductor of the Gryphon Singers and other University of Guelph choirs, and Brent Rowan, the director of the Guelph Youth Jazz Ensemble, all contributed their faith and phenomenal skills to the rehearsals and performance of the final piece, which was showcased at the Arts Everywhere Festival on January 24th, 2020.  Marianne Trudel played piano as a soloist in a trio with Ben Finley on bass and Philip Mayer on percussion.  In all, more than 90 people sang and played their instruments to bring Trudel’s work to life. 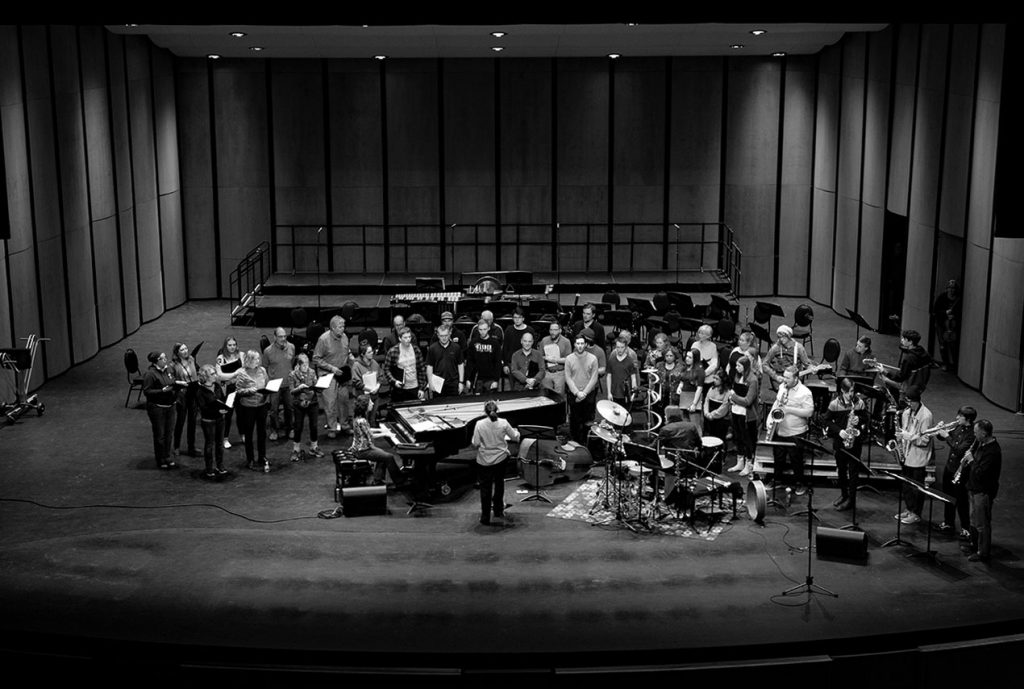 At the dress rehearsal for At the Heart of Silence: Light. at the River Run Centre in Guelph, ON.
photo by: Richelle Forsey 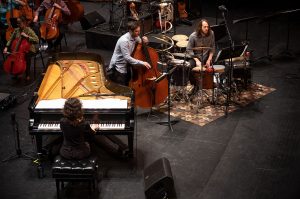 Performance photo from At the Heart of Silence: Light. Marianne Trudel with the Ben Finley and Philip Mayer.
photo by: Richelle Forsey

The Improviser-in-Residence project is designed to bring together music-makers in our community with a notable artist for the education and enjoyment of everyone.  The value of this work can be heard in the participants’ comments.  For some, the “shared artistic experience and friendship,” was magical, as was the “opening of the ears and minds” of the musicians and singers.  For others, the learning opportunity was new: “The way she wrote things down for us–it was an insight into how jazz happens.  How she wrote out the cross-rhythm.”  For still others, the ties with other musicians in the community were strengthened: “I made deeper connections … with orchestra members and other directors which helps strengthen the community relations and keeps us supporting each other as the more often we see each other the more often we talk about each other and cross promote each other’s groups via word of mouth.”  The learning and the strengthening of connections are the hallmarks of our vision for the Improviser-in-Residence projects.  This time around, we also made dreams a reality, inciting a gratitude for the powers of art and community endeavour to help people feel included and feel like vital contributors to something much larger than themselves.  As one musician put it, “It was also a dream come true to play in a trio alongside a choir, orchestra—and a stellar youth group!” 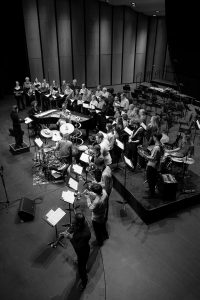 The last word goes to Marianne Trudel herself who commented on the highlights of the project:

“Meeting great human beings/ musicians such as Judith Yan, Marta McCarthy, Ben Finley, Philip Mayer, Brent Rowan and  feeling the energy and great response of the musicians to the music. To see all these people on the same stage. To hear 2 kids from the GYJE telling me after the concert with tears in their eyes how much they appreciated the chance to participate in this. To see the smiles in the choir, to know that we are doing something good here and meaningful.”

We are grateful to the Musagetes Foundation for their generous support of this project.

From a rehearsal for At the Heart of Silence: Light. at the River Run Centre in Guelph, ON.