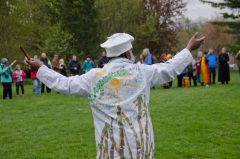 Douglas R. Ewart (reeds), the former chair of the Association for the Advancement of Creative Musicians (AACM) was the 2015-2016 Improviser-In-Residence in Guelph and Waterloo. Ewart’s residency included instrument building workshops, musical improvisations with local artists, a performance at the 2015 Guelph Jazz Festival & Colloquium and culminated in his orchestrated, massive community improvisation Crepuscule 2016, in Guelph’s Arboretum. The Improviser-in-Residence program is a collaborative partnership between IICSI, the Laurier Centre for Music in the Community, and Musagetes. 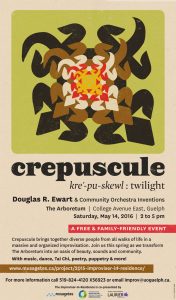 Crepuscule events include a broad combination of community groups and artists organized as “pods” for the event. Learn more about the Pods of Crepuscule 2016.