Home » Library » Duke UP series » People Get Ready: The Future of Jazz is Now! 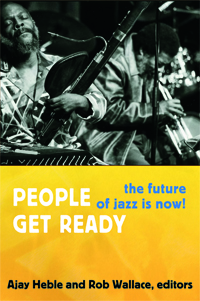 People Get Ready: The Future of Jazz is Now!

The first book to launch in the Improvisation, Community, and Social Practice series with Duke University Press, Ajay Heble and Rob Wallace‘s coedited collection, People Get Ready: The Future of Jazz is Now!, is “something of an attempt to correct the historical record, and … an intervention into current debates both about where the music has been and where it might be going” (Heble and Wallace, 1).

In People Get Ready, musicians, scholars, and journalists write about jazz since 1965, the year that Curtis Mayfield composed the famous civil rights anthem that gives this collection its title. The contributors emphasize how the political consciousness that infused jazz in the 1960s and early 1970s has informed jazz in the years since then. They bring nuance to historical accounts of the avant-garde, the New Thing, Free Jazz, “non-idiomatic” improvisation, fusion, and other forms of jazz that have flourished since the 1960s, and they reveal the contemporary relevance of those musical practices. Many of the participants in the jazz scenes discussed are still active performers. A photographic essay captures some of them in candid moments before performances. Other pieces revise standard accounts of well-known jazz figures, such as Duke Ellington, and lesser-known musicians, including Jeanne Lee; delve into how money, class, space, and economics affect the performance of experimental music; and take up the question of how digital technology influences improvisation. People Get Ready offers a vision for the future of jazz based on an appreciation of the complexity of its past and the abundance of innovation in the present.

More information on People Get Ready: The Future of Jazz is Now! is available at Duke University Press, where the book is available for purchase.