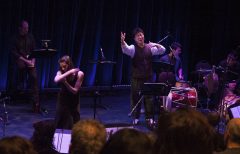 The Art Of Risk: Negotiating Unfamiliar Territory in Large-group Improvisation

In 2014, Musagetes, IICSI and the Laurier Centre for Music in the Community’s Improviser-in-Residence, Dong-Won Kim, spent the fall in Guelph bringing together a myriad of musicians and artists through improvised music and dance. His residency culminated on November 28th with a most unique collaboration involving 20 members of the Guelph Symphony Orchestra (Judith Yan, Artistic Director), the Rivers Jazz Ensemble, storyteller Ben Grossman, dancer Georgia Simms, and the Guelph Youth Jazz Ensemble (Brent Rowan, Director).

To say this was a collision of disparate worlds would be an understatement. Like many people who use improvisation as a vehicle for expression, Mr. Kim worked from a place of loose parameters and maximum exploration. He gave the musicians a text and asked them to create a sonic soundscape that enhanced the words, much like a soundtrack for a movie. Conversely, many of the members of the Guelph Symphony Orchestra came from the western art music tradition of bringing to life the notations set to paper by the likes of Mozart and Beethoven. While there is some room for interpretation, the majority of the information they need is on the page: notes, rhythms, dynamics, tempo, etc. The rehearsal I witnessed on November 27th was only the second time this collective had assembled. While the local improvisers and the jazz youth band were clearly comfortable with Mr. Kim’s approach, many of the GSO musicians were visibly unnerved. I believe this was due to the fact that many of them had never worked in such an open and exploratory manner before. Also, I do not think the upcoming concert put anyone at ease. I left that rehearsal wondering whether these two seemingly dissimilar spheres would be able to create a unified product for public consumption in less than 48 hours.

This collaboration started when Ajay Heble, Project Director of IICSI, and Judith Yan had a conversation in passing about how improvisation impacted society. Ajay described a scenario involving two or three musicians improvising together. Judith immediately wondered what would happen with a 50-60 piece orchestra. What eventually transpired was that 20 members of the GSO and their fearless leader took the leap of faith to join the project. It is critical to note that Judith led the charge all the while coming to this project with very limited experience in improvisation. In my interview with her, she was very open about how she simply jumped into this project, knowing full well that it was completely new territory for her. She saw the opportunity for herself and the GSO musicians to move outside of her comfort zone and instantly took it.

At the initial rehearsal, which I was unable to attend, the musicians were given a series of fables: The Bell Tower, The Unanswered Answered Question, Black Angel, The Father, His Son and Their Donkey, and The Tapestry. No music notation, only the text of the stories. Video captured during that session showed Mr. Kim asking the musicians to take risks and to the best of their ability try to create a soundtrack for the text. My understanding of the evening was that it was very much like a blind date, with each party trying to determine where the other was coming from. Judith recalls that,“they had no idea what we were going to do.”

The best word to describe the first rehearsal I attended is chaos. Unlike a rehearsal of a Mahler symphony, this process had no measure numbers to reference, no concrete starting points, and, most significantly, no truly fixed structure beyond the text of the fables. Orchestral musicians, by and large, are not used to being asked for feedback or input. They also tend to become uncomfortable when aspects of a rehearsal take too long.

I initially thought that Mr. Kim was unorganized and that he lacked a clear idea of what he wanted. In fact, the exact opposite was true. He knew exactly what he wanted. He just needed to find a way to express that through the collection of musicians and artists he had assembled. A great deal of trial and error ensued.

Mr. Kim comes from a very different sonic world than the members of the GSO. It took quite some time for the classical musicians to trust themselves enough to take the necessary risks and really open themselves up to what he was attempting to achieve. A sense of urgency, particularly from the GSO musicians, began to emerge during the Saturday morning rehearsal. The firm deadline of a public performance tends to do that. They began to ask fairly pointed questions about what would happen in a certain section or what exactly did Mr. Kim want at a particular moment. Being a very intuitive person, he sensed that the GSO musicians were struggling with the lack of structure. It became clear that Mr. Kim was going to have to prescribe things much more than he had maybe originally intended. Things began to take shape when they were given a tonal region or a rhythmic motive. He met them at their comfort level and managed to give them enough structure to feel safe, but left enough room to allow for spontaneity.

In an interview between the dress rehearsal and the final performance, Mr. Kim mentioned that knew he would be working with musicians in Guelph. He began to wonder how he might conclude his four-month residency. He mused that, “playing improvisational music with many musicians is always risky business. Very, very risky.” He decided to use a text as the anchor. What was most refreshing what just how aware he was of how difficult it is for classical musicians to create without the structure of traditional notation. He was very pleased with their enthusiastic response to his very “weird” suggestions and was moved that they allowed him to design the musical flow.

The Art of Risk

Risks were taken by every participant in this collaboration. Judith Yan and Catherine Molina, General Manager of the GSO, actively sought this experience out. Yan, a classically trained conductor whose career highlights include being a staff conductor for the San Francisco Opera, the Canadian Opera Company, and the National Ballet of Canada, as well as international conducting engagements in Germany, Italy, New Zealand, and Hong Kong, admitted to leaping into this project knowing full well that she and the orchestra members were wading into unfamiliar territory.

Even the seasoned improviser/pedagogue Dong-Won Kim took a leap of faith in putting a symphony orchestra, a jazz ensemble, a storyteller, a dancer, and seasoned improvisers on one stage. He also made sure to include the lighting and staging crews in the creative journey by allowing them to experiment and improvise alongside the musicians. 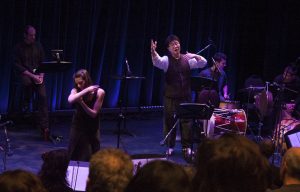 The final public performance, aptly named “When Rivers Meet”, proved to be a transformative experience for performers and observers alike. Dong-Won struck the right balance of form and freedom, allowing the classically trained musicians who were initially apprehensive about performing without traditional notation to create and respond in the moment. I believe any less structure would have caused artistic paralysis. Any more would have come across as contrived. In the end, it felt as though many of the musicians who had originally been frozen by the thought of making music that was not explicitly notated began to trust themselves.

As someone who came to improvisation after being classically trained, I can attest to the freedom that appears once the fear subsides. My personal trajectory followed a familiar path of being paralyzed when notation was not present, to playing too many notes that were not connected to each other or those being created around me, to finally quieting the mind and being able to occasionally respond in a meaningful way to ideas presented to and created by myself. The journey continues. I am by no means an expert, but it is simultaneously comforting and empowering to be able simply pick up my saxophone and play. No need to track down old etudes or sonatas. I can just create something in the moment, alone or with others.

Judith Yan and the musicians in the GSO deserve incredible props for not only intentionally seeking out this opportunity, but for also embracing it with complete commitment. As an aside, the GSO musicians were not inclined to appear on camera. I think this was due to their perfectionist tendencies and to not being totally certain with how this was all going to play out. It is also important to note that this was one of my first times interviewing in this manner. Dropping in mid-process made it challenging to get to know the musicians in a meaningful way and to build trust. They were happy to talk during breaks and they all generally admitted to being out of their comfort zone but at the same time enjoying the discomfort. I think much of the willingness to take risks came from Dong-Won’s immense appreciation for their efforts and Judith’s visible interest in the project. Mr. Kim, a self-proclaimed “reckless dreamer,” masterfully brought together a variety of music communities and found a way to create a common language that resulted in a unified and inspiring conclusion to his residency.

A special thanks needs to go to Nick Loess, videographer for this project. He captured amazing footage of this collaboration and distilled it into a great video, that is soon to be published on IICSI website.