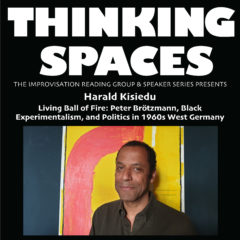 This talk is concerned with the experiences and musical practices of important saxophonist and improviser Peter Brötzmann. It illuminates the creative tension between the realms of music and politics that shaped his music’s production and reception during the latter half of the 1960s and situates his work within the larger context of the rise of the New Left and the West German student protest movement during this period. Moreover, the talk elucidates the building of alliances between segments of the West German student protest movement and the Black Freedom Movement in the US as an important backdrop for Brötzmann’s engagement with black experimentalism.

Harald Kisiedu is a historical musicologist and received his doctorate from Columbia University. His research interests include jazz as a global phenomenon, music of the African diaspora, Afrodiasporic composers, music and politics, improvisation, transnationalism, and Wagner. He has published on Peter Brötzmann, Ernst-Ludwig Petrowsky, Muhal Richard Abrams, Black composers, jazz and popular music in the Terezín concentration camp and the political reception of Wagner’s Meistersinger of Nuremberg in the National Socialist Regime. He is also a saxophonist and has performed with George Lewis, Branford Marsalis, Henry Grimes, Hannibal Lokumbe and Champion Jack Dupree. He has made recordings with the NY-based ensemble Burnt Sugar the Arkestra Chamber and composer/improviser Jeff Morris.