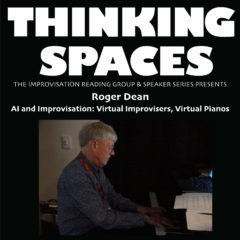 “I have engaged with computer-interactive improvisation since it became financially and practically accessible on desktop and portable computers, notably with the advent of the programming platform MAX, from 1992 or so onwards. MAX permits coding almost any kind of algorithmic process, and together with its later complements MSP and Jitter, allows analysis of incoming audio and visual data to be part of the algorithms. Such algorithms allow numerous unpredictable elements, that, a little like human collaborators, permit surprise, error, erasure, and a variety of other inter-musician stimuli. Thus improvising solo together with a computer can sometimes mimic aspects of duetting with another improviser.

AI, or more specifically machine learning, is a very different process from normal musical algorithms, in part because it depends on the machine gaining prior knowledge of some corpus of work instead of depending on a user formulated algorithm. However, a trained musical machine, such as I aim to make my own Deep Improviser, can be manipulated by a user, but can also function autonomously, and like older algorithms, take note of musical or other inputs. I am exploring generative AI machine learning for purposes of both composition and improvisation, but more generally, in order to investigate a space of possibilities that is outside my normal contexts (i.e. outside both the contexts I provide myself, and those provided by collaborators). While this field, and particularly my own machines, have a long way to go (and indeed the Australian Research Council funded project I have is only approaching its halfway point), I hope to point to some of the interesting outcomes and possibilities.”

Roger Dean is a composer/improviser, and since 2007, a research professor in music cognition and computation at the MARCS Institute, Western Sydney University. His research folds into his creative work, currently particularly by means of deep learning computational models for music generation. He founded and directs the sound and intermedia creative ensemble austraLYSIS, which has appeared in 30 countries. He has performed as bassist, pianist, piano accompanist and laptop computer artist in many contexts, from the Academy of Ancient Music and the Australian Chamber Orchestra, to the London Sinfonietta, and from Graham Collier Music to duetting with Derek Bailey and Evan Parker, and performing with leading improvisers particularly from Europe and Australia. About 70 commercial recordings and numerous online digital intermedia pieces represent his creative work, and he has published more than 300 journal articles. Current research concerns improvisation and computational creativity, affect, roles of acoustic intensity and timbre, and rhythm generation and perception. With Hazel Smith and Will Luers, he won the 2018 international Robert Coover prize for a work of electronic literature. Currently austraLYSIS is preparing a duo album, of sound and intermedia, featuring diverse pairings: such as human/computer, human/environment, text/improviser, image/improviser. Prior to 2007, he was a full professor of biochemistry in the UK, foundation CEO/Director of the Heart Research Institute, Sydney, researching on atherosclerosis, and then Vice-Chancellor and President of the University of Canberra.