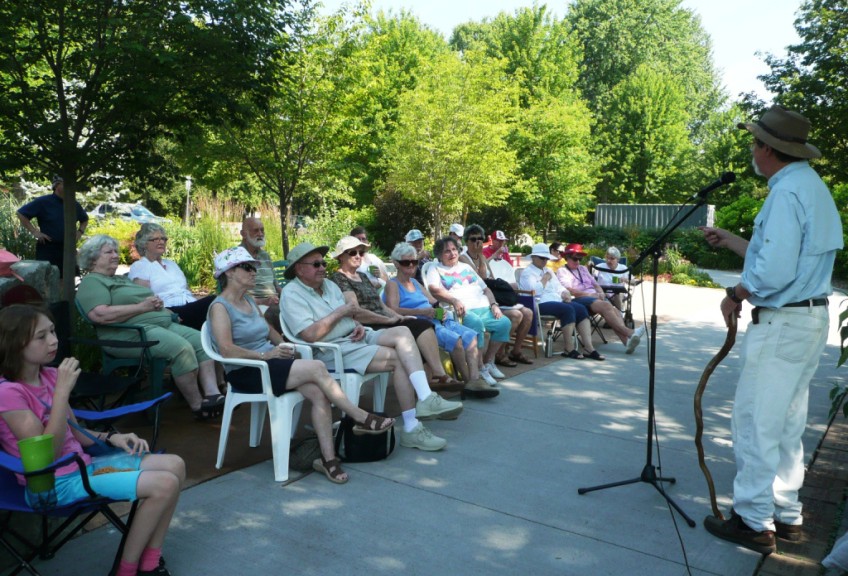 The Guelph Enabling Garden is hosting the Guelph Guild of Storytellers for their 10th season with 10 Friday morning “Tells” scheduled at the Garden in Riverside Park at 10:30 a.m. starting June 30th.

The performances start promptly at 10:30 a.m., and audience members are asked to bring their own lawn chairs and a mug for a free beverage.

Free admission, but donations are welcome.

• June 30 — Sarah Abusarar, from Toronto, is a native of Pakistan, but grew up in Croatia, where many of her stories were woven. She will give a debut performance, along with Tea ’n’ Tales organizer Brian Holstein.

• July 7 — James Gordon, a local musician and city councillor, will return to share songs of local folks and history, as well as some tales about his travels around the continent to entertain. He will be joined by local storyteller Jenny Higgins, making her debut.

• July 14 — “Mr. Guelph Guitar,” Doug Larson, is back by popular demand to share stories about old cedar trees, the construction of the Guelph Guitar and his grandson.

• July 21 — The duo of Brenda Lewis and Gayle Ackroyd will bring their musical talent to the Enabling Garden for a second season. They will be joined by Elora storyteller and social activist Donna McCaw, performing for her 10th season.

• Aug. 4 — Longtime Guelph Guild of Storytellers member Ann Estill will tell tales along with Michael (Rusty) Dougherty, who tells of long ago times — some set in Ireland, some in Montreal

• Aug. 11 — Local puppeteer Jay Wilson will return with tales, poetry and maybe even one of his puppets to get the audience laughing. He will be joined by Kitchener’s Carolyn Wilker, who has long entertained audiences in K/W.

• Aug. 25 — Tea ’n’ Tales regular Elizabeth Matson will travel from Wisconsin to join her mother, well-known teller Beve Matson for an hour of thrills as they spin their tales.

• Sept. 1 — Author, storyteller and African dance instructor Adwoa Badoe will wrap up the season, joined by Guelph icon Sya VanGeest, who tells stories with a passion that draws in her audience.