Thinking Spaces: “Untitled, or, how free is free anyway?” with Aruna Antonella Handa 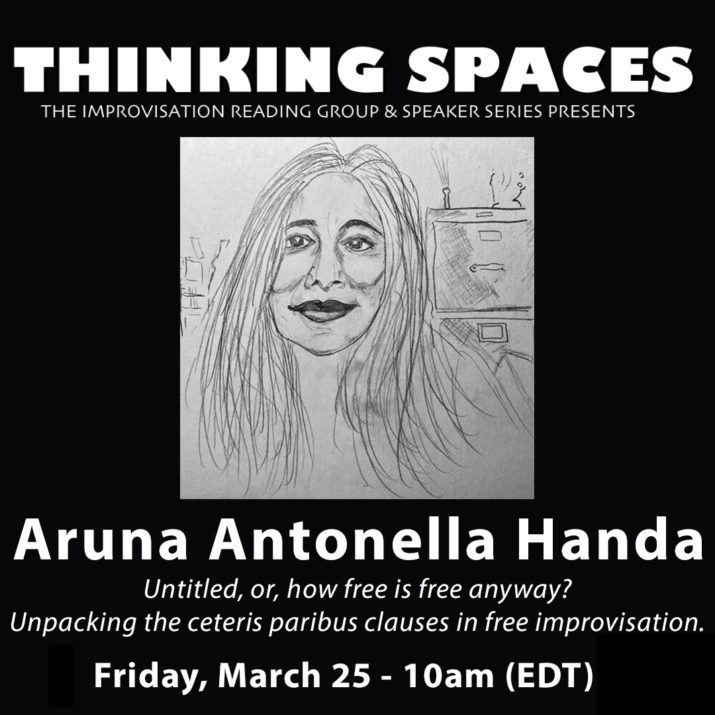 Thinking Spaces: The Reading Group and Speaker Series is pleased to present “Untitled or how free is free anyway?  Unpacking the ceteris paribus clauses in free improvisation,”  a talk by Aruna Antonella Handa. The event will take place on Friday, March 25, 2022, at 10 am EDT via Zoom. A moderated Q&A will follow the talk.

If you are interested in attending, please register online: https://uoguel.ph/arunaantonellahanda. A Zoom link will be sent the day before the event.

Description:  I want to be free, but so often i feel embarrassed as i find myself grasping for the scaffolding. I want to be free and then i hear the tropes i hear so often and it’s me, my voice. I want to be free and yet somewhat paradoxically, i need to be tied up in rules to experience freedom, to break free of the invisible limits to my expression. I spy those ceteris paribus clauses in the world of free improv though. I can see that they are super packed, the contents all pressed and folded with such precision that it’s actually staggering when you see how much they managed to fit in there. So, how free is free anyway?

Aruna Antonella Handa creates theatre, music and performance art, exploring the nexus of social justice, environmental and intimate themes. Her work investigates fault lines between composed and improvised, personal and social, addictive and temperate, artist and audience, here and somewhere there. Salonnière of the Future Food Salon, Aruna plans to launch the third series in Guelph at the Arboretum in late 2022 (Covid Mist Date: late 2023). A five act immersive musical comedy, Voyage to Anthropocene will explore the third kingdom of life: Fungi. Previous series which toured Toronto, New York, Austin and Montreal explored edible insects. With ensembles and as a solo artist, Aruna has performed in Canada and the US at festivals and venues including the Mariposa Folk Festival, Tarragon Spring Festival, Nuit Blanche Toronto, Canadian Music Week, the Monarch Club, and the Tranzac in Toronto. This year, Aruna & the Sirens, will release the LP Of Bones & Addicts, and two singles including “City Hotel” which chronicles racist attacks in Ontario following the Trump electoral victory. Extending the work on gender-based violence she began with Have You Seen My Sister?, which launched at Nuit Blanche in 2017, Aruna addresses what the UN has labelled the ‘shadow pandemic,’ the global surge in domestic violence, with a series of live performances of her song cycle, and the release of a single recorded in socially distanced ways with musicians from across Canada and the US. Aruna had three degrees in philosophy (BA at McGill and an MPhil and PhD from University of London (King’s)) but she ate them.