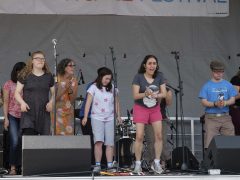 A Think Piece on the 2017 Play Who You Are program with KidsAbility.