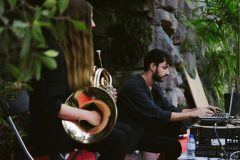 A Reflection from Emerging Scholar Marc Hannaford, on the 2018 Guelph Jazz Festival Colloquium: Hovering at the Edge: Words, Music, Sound, and Song.

The Emerging Scholars Program at the 2018 Guelph Jazz Festival and Colloquium provided me with an opportunity to reflect critically on the multifarious and occasionally paradoxical relationship between words and improvisation. These relationships resonate strongly with my work as both a music theorist and improvising pianist. A crucial challenge in my academic work concerns formulating analyses that articulate what it feels like to do improvised music; that is, to communicate some of the embodied aspects of improvisation in my writing. One’s choice and deployment of words in analyses of improvised music are thus paramount to avoid reifying the embodied, dynamic feeling of improvising, and I received a number of encouraging suggestions from the events in Guelph in September. In this essay I reflect on one of these events—Jen Reimer and Max Stein’s set of sound installations, Sounding the City 003 – Guelph.

My choice to discuss Sounding the City is perhaps unexpected, given that none of the sites that I visited explicitly employed words. Nonetheless, the sites that I visited reminded me of the importance of the position from which one listens and speaks in relation to sound. I visited three sites: Bullfrog Pond Park, Waterworks, and Palmer and Queen Street. At Bullfrog Pond Park, resonances and reverberations generated by cars on the street above travelled down a long tunnel to the listener. The resonant frequency of the tunnel is 61 Hz, but I found that my phenomenological account of this frequency depended heavily on my position relative to the tunnel’s opening. Moving slowly across the diameter of the aperture gradually altered the resonance of the resonating frequency in my body, as if bringing it in and out of focus. The Waterworks site afforded a more expansive exploration of the relationship between space, my body, and resonating frequencies. This site situated my body as a kind of mixing device for various sounds—movement across, away from, and closer to the speaker engendered various sonic compounds, drawing on sounds of construction, people walking with their dogs, and children playing, among others. Finally, the Palmer and Queen Street site dramatized the importance of subject position via its striking deployment of sound sources directly in front of (the church) and behind (the speaker) the listener. My experiences of embodied listening at these sites recalled philosopher Sara Ahmed’s work on orientation, positionality, and the importance of subject position in discussions of ontology and epistemology. In terms of music theory and analysis, Reimer and Stein’s installations suggested the importance of attending to one’s physical position in relation to sound—headphones, stereos, and live performances all afford different physical orientations to sound—as well as the role of subject-position in analyses of improvised music—salient events in music are conditioned by one’s background and experience, as well as the often implicit goals of music analysis. Put differently, music theory and analysis has historically often sought to reify, rationalize, and recast improvisation in terms congruent with its Eurocentric epistemological foundations. Reimer and Stein’s installations reminded me of the importance of explicitly implicating the listener/analyst/author in analyses of improvised music, and implied that such reflections might generate more productive musical analyses.

Inspired by the initiative developed by our friends and colleagues at the ArtsEverywhere Festival, and in partnership with the University of Guelph, the Emerging Scholars program offers scholars from all levels of study the opportunity to participate and engage with participants in our Colloquium program. They also receive complimentary attendance at two ticketed Guelph Jazz Festival performances, an intimate “Scholar’s Dinner” with Colloquium presenters, artists and participants, and an opportunity to publish their writing about their Festival and Colloquium insights on the IICSI website.