The AUMI Consortium is an international research group dedicated to exploring, sustaining, developing, and sharing the Adaptive Use Musical Instrument, a free software download interface that uses camera tracking to facilitate music-making across all abilities. Each consortia site includes at least one IISCI researcher. 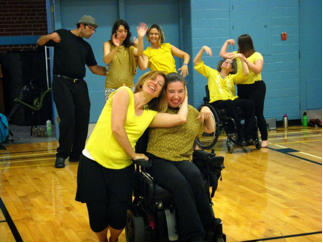 From AUMI-McGill: Eric Lewis writes, “This month a segment on our Mackay Center School [the Montreal school for children with motor, speech or sensorial difficulties] project will air on French television, featuring interviews with a number of the McGill-based AUMI researchers and Mackay Center School staff. We have completed our second pilot project at Mackay, and are now analyzing the data.” They will present the preliminary results of this research at the Improvisation and Community Health Conference in June, during which representatives from the different AUMI sites will visit Mackay School and have the opportunity to share AUMI-related research.

From AUMI-Carleton: Ottawa filmmaker Andrew Hall has completed Turning the Page at H’Art of Ottawa, a documentary film about AUMI/IICSI member Jesse Stewart’s 2014 collaboration with H’Art of Ottawa, a project in which AUMI figured prominently. The film premiered on March 4, 2015 at the Mayfair Theatre in Ottawa for an audience of over 200. On February 12 & 13, Jesse premiered a new work, I Need You?, with Propeller Dance, a mixed abilities professional contemporary dance group in Ottawa. I Need You? combines AUMI with movement and percussion.

AUMI-CDL/CCC reports that Pauline Oliveros will give a keynote address on “The Ethics and Practice of Listening,” followed by a short Deep Listening workshop targeted at both musicians and legal professionals for the conference, “Just Improvisation: Enriching child protection law through musical techniques, discourses and pedagogies,” to be held on May 29th-30th at the Sonic Arts Research Centre, Queen’s University Belfast.

AUMI-KU participated in sponsoring and presenting at “Improvising in Place: An Interdisciplinary Jazz Studies Colloquium,” held at University of Kansas in March 2.