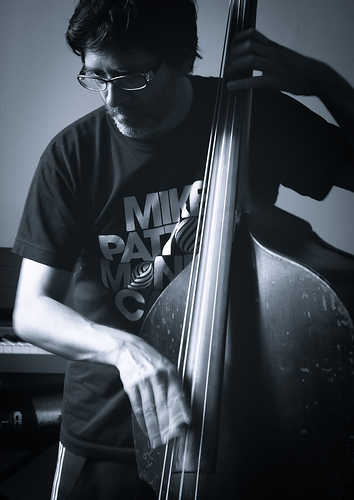 As we usually hear little or nothing about improvised music from South America, this issue’s Artist of the Month is Pablo Vazquez, double bass and electric bass player, composer and improviser. Born in Argentina in 1963, Vazquez is the founder of La Cornetita, the pioneering group of Argentinean improvisers who have been playing together since 1997. Vazquez has performed with renowned Argentinean improvisers such as Pablo Puntoriero, Nicolas Chientaroli, Enrique Norris, Augusto Urbini, Wenchi Lazo, Pablo Ledesma, and Ada Rave as well as with players from all over the world, like Frode Gjerstad, El Pricto, Diego Caicedo, Marko Jelaka and others. As a teacher, he is currently leading workshops dedicated to the practice of free improvisation in Buenos Aires.