Home » News » A series of public concerts in the Gaspésie region

A series of public concerts in the Gaspésie region

Returning for its fourth edition, MILE camp this year will run from August 3–10 and is intended for adventurous and curious musicians of all ages. Located at Coin-du-Banc, a village on the Gaspé coast of Québec minutes away from the famous Rocher Percé, the camp will focus on sharpening participants’ musical improvisation skills and using them to inspire outreach in their communities. Ajay Heble, Director of the International Institute for Critical Studies in Improvisation, and Founder and Artistic Director Emeritus of the award-winning Guelph Jazz Festival, boasts that “the coastal village of Coin-du-Banc offers an inspirational and spectacular natural setting for a summer camp devoted to musical improvisation. We contend that where the land ends, imagination begins.” Heble is co-organizing the summer camp initiative with Coin-du-Banc resident Alain Chalifour.

This year, the camp is being run in conjunction with another exciting initiative organized by Heble, his University of Guelph colleague Frédérique Arroyas, and the team at IICSI, a two-week Summer Institute for graduate students to be held at the University of Laval’s Summer School campus in the Villa Frederick-James, in Percé. During this two-week summer institute (August 4–17), graduate and post-graduate students will workshop and network with leading scholars and practitioners in the field of Critical Studies in Improvisation, while taking advantage of the spectacular natural setting of the Gaspésie.

Here is a list of public events associated with these initiatives: 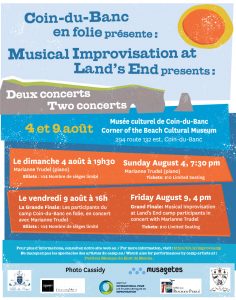 On Sunday August 4th (7:30 PM), camp faculty member Marianne Trudel will perform a solo piano concert at Le Musée culturel de Coin-du-Banc / Corner of the Beach Cultural Museum, 294 route 132 est in Coin-du-Banc. This will be an opportunity to hear one of Canada’s most accomplished pianists in the acoustic splendor of the recently deconsecrated St. Luke’s Anglican Church.

On Thursday August 8th (4:30 PM), students and faculty from the camp will perform in Gaspé under the direction of Marianne Trudel at Festival Musique du Bout du Monde at Scène du FMBM. Admission is free.

On Friday August 9th (4:00 PM), the camp will culminate with a Grand Finale event featuring camp participants in a public concert with Marianne Trudel, where musicians of all ages and levels of experience will showcase and explore new and innovative approaches to creating and performing improvised music. This event will take place at Le Musée culturel de Coin-du-Banc / Corner of the Beach Cultural Museum. 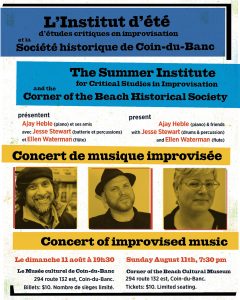 On Sunday August 11th (7:30 PM), Ajay Heble will perform on piano in a concert of improvised music with two friends, fellow musicians, and faculty members at the Summer Institute: Ellen Waterman (flute) and Jesse Stewart (drums and percussion). This event will also take place at Le Musée culturel de Coin-du-Banc / Corner of the Beach Cultural Museum.

Tickets for the August 4th, August 9th and August 11th concerts are $10 and will be available at the door. Seating is limited.

Marianne Trudel is a multi-talented pianist, composer, improviser, and arranger. As a performer, she pursues an active career in a variety of settings ranging from solo performance to duo, trio (TRIFOLIA), Marianne Trudel 4 + Ingrid Jensen, septet, and large ensembles. She has presented her music in various countries: Canada, United States, Mexico, France, Spain, Germany, the Netherlands, England, Scotland, Italy, Hungary, Lithuania, and China. She has published several recordings as a leader, all having garnered rave reviews. Her album, La vie commence ici — Marianne Trudel featuring Ingrid Jensen (Justin Time Records, 2014), was nominated for a Juno Award, and was a finalist at ADISQ 2015 and at Prix Opus 2015 (Quebec). Her trio album Trifolia-Le Refuge was also Juno nominated (2014) and was awarded the Prix Opus 2013 (Quebec) for the best jazz album of the year. This is her third consecutive season as a faculty member with the camp.

The International Institute for Critical Studies in Improvisation (IICSI) is supported through generous funding from the Social Sciences and Humanities Research Council of Canada (SSHRC), and was created from the Improvisation, Community, and Social Practice (ICASP) project launched in 2007. The institute aims to use improvisation as a pedagogical tool to create social change in communities by combining arts, scholarship, and collaboration among people of different backgrounds. The institute has now grown to include 58 researchers across 20 institutions and more than 30 community-based partner organizations around the world.