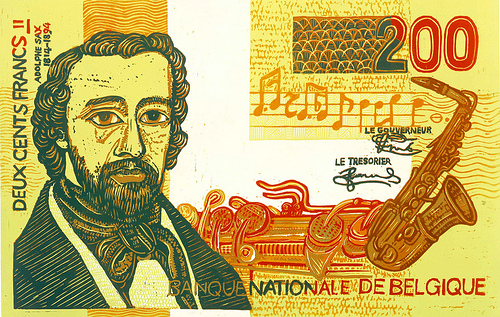 Before last year completely fades from our overloaded memories, we should note that 2014 marked the 200th birthday of Antoine-Joseph “Adolphe” Sax. Adolphe Sax was a Belgian musical instrument maker and designer whose experiments with brass and reed instruments still resound throughout the musical world, notably with his most famous invention, the saxophone.

Sax wanted to design an instrument that would fill the tonal area between the loudness of brass instruments and the facility of the quieter reeds and double reeds. In 1846 he filed his first patents for the saxophone. As the instrument became better known, it was widely used in military bands, and after World War I creative African American musicians began finding ways to extend the saxophone’s use into a new area of music that began to be called jazz.

“What tremors ran through Adolphe Sax
The day Bean grabbed his ax?”