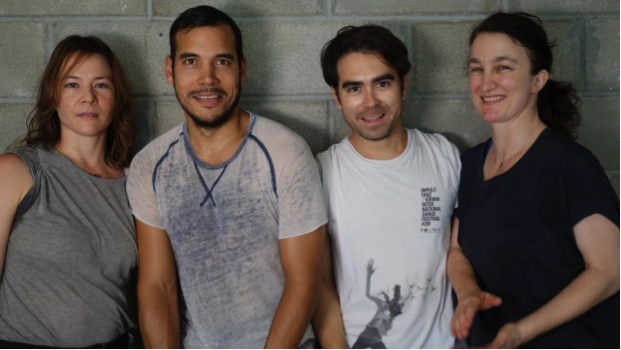 Jeanine Durning is a dance and performance artist whose new piece, To Being, runs at New York’s Chocolate Factory Theater until September 26th, alongside a remount of its companion work, inging. The artist writes, “My current research deals with a practice that I started to develop back in 2009 called nonstopping which has manifested as a solo performance practice called inging, and a group performance practice called To Being. Whereas inging proposes the insistent practice of unscripted nonstop speaking as performance, To Beingproposes the insistent and imperative relationship to nonstop moving as performance. Nonstopping emerged as a practice when I started to question what the nature, role and relevance of performance is, and how to be able to deal with essential questions about who we are, about dance and the body, about personal history, about collective thinking and experience, about phenomenology, about perception, about theater and fiction, about communication and meaning; To Being proposes the insistent and imperative relationship to nonstop moving as performance. With To Being we are asking: What is at stake? Where is the end? What does it take to stay in action? And how can we give more when we feel that we’ve met our limit?”