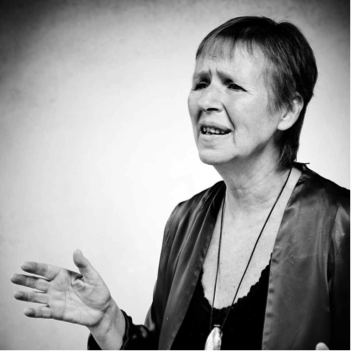 Maggie Nicols, born in Edinburgh, Scotland in 1948, worked in popular music and jazz as a singer and dancer until, in 1968, she landed in London and began performing with John Stevens’ Spontaneous Music Ensemble, featuring Trevor Watts and Johnny Dyani. From that point on she began breaking new ground in the world of improvised vocalese, as well as acting and running workshops in voice and improvisation. She performed with Keith Tippett’s fifty-piece Centipede ensemble and Ken Hyder’s Talisker, and joined with Julie Tippetts, Phil Minton and Brian Eley in the group Voice. In 1977 she formed the Feminist Improvising Group with bassoonist Lindsay Cooper, cellist Georgia Born, vocalist/pianist Cathy Williams and trumpeter Corine Liensol; as she told Julie Dawn Smith (in her essay, “Playing Like a Girl”), “We recognized that women were being excluded and we wanted to just experience what it was like to play with other women…. I wanted to feel the intimacy musically that I felt with women. You know when you hang out with women, that quality of shared experience. How would that translate artistically?” Nicols has long been acknowledged as a pioneering European improviser, both in her vocal and performance work, and in her achievements in making feminizing inroads into the jazz-based, traditionally male-centred world of musical improvisation. Her other ensembles include Les Diaboliques with pianist Irene Schweizer and Joelle Leandre; in 2014 she spent a week-long residency at IICSI’s home town of Guelph with fellow vocalist Phil Minton, collaborating in workshops and performances with local musicians.