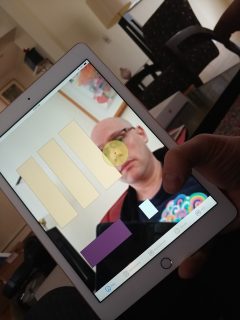 IICSI researchers have been closely involved with both the development of and research on the practical applications of the Adaptive Use Musical Instrument (AUMI), a software-based instrument meant to adapt to the user, rather than the other way around. AUMI is open source software which uses motion tracking to create sound, allowing individuals with a wide range of movement ready access to music- and sound-making. The project was an initiative of musician, composer, and humanitarian Pauline Oliveros before her passing.

On November 10th, 2018, this team organized the first trial of AUMI Sings, pairing three differently-abled AUMI Sings singers with the St. John’s Vocal Exploration Choir, an improvising choir founded by Dr. Chris Tonelli and currently under the artistic directorship of Alison Carter and Mack Furlong. This large ensemble spent the day improvising together with guidance from Laurel Forshaw. Afterwards, participants were interviewed by the research team, with assistance from graduate students from Memorial’s Ethnomusicology program. The data collected will be used to aid the continuing development of AUMI and AUMI Sings, and will help to inform future projects, which seek to build bridges across abilities through collective musical improvisation.

The AUMI Sings research project was funded by the Bruneau Centre for Excellence in Choral Music and the IICSI.