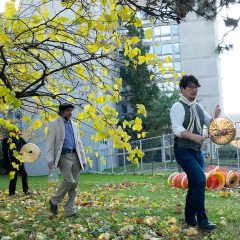 Constructed in 1967, the University of Guelph’s MacKinnon Building is about to undergo a major upgrade. Home to the College of Arts and the IICSI, the renovations will include the construction of the CFI-funded ImprovLab. IICSI is increasingly known internationally for the critical study of improvised creative practices, and the ImprovLab space aims to further this research. The ImprovLab will be a publicly accessible multi-use research lab for the presentation, broadcast, archiving, and analysis of improvised performance, community workshops, and audience reception studies across a variety of media. 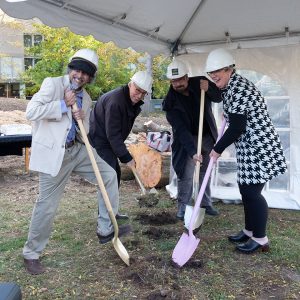 The new facility will provide a space for researchers to collaborate with each other, the university population, and the broader community. Renovations will also involve the building of a new main entrance, creation of student spaces, reconfiguring and returning the Luscombe Theatre to a black-box performance space, and new practice spaces for music, as well as aesthetic updates and changes to address issues both of accessibility and acoustics. The ground-breaking ceremony for this exciting new space, designed by Diamond Schmitt Architects, took place Thursday, October 24th and featured a ceremonial ritual led by Korean percussionist, Dong-Won Kim. 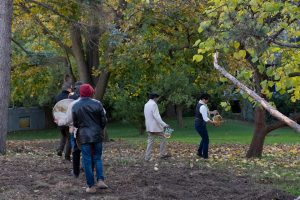 Dong-Won Kim leading the percussion ritual at the groundbreaking ceremony for the ImprovLab and Mackinnon building performance arts wing renovation at the University of Guelph.
photo by Richelle Forsey 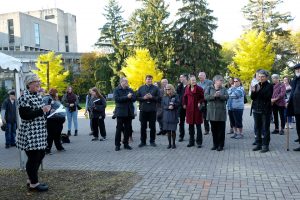 Dean of the College of Arts Samantha Brennan speaking at the ceremony for the ImprovLab and Mackinnon building performance arts wing renovation at the University of Guelph. photo by Richelle Forsey