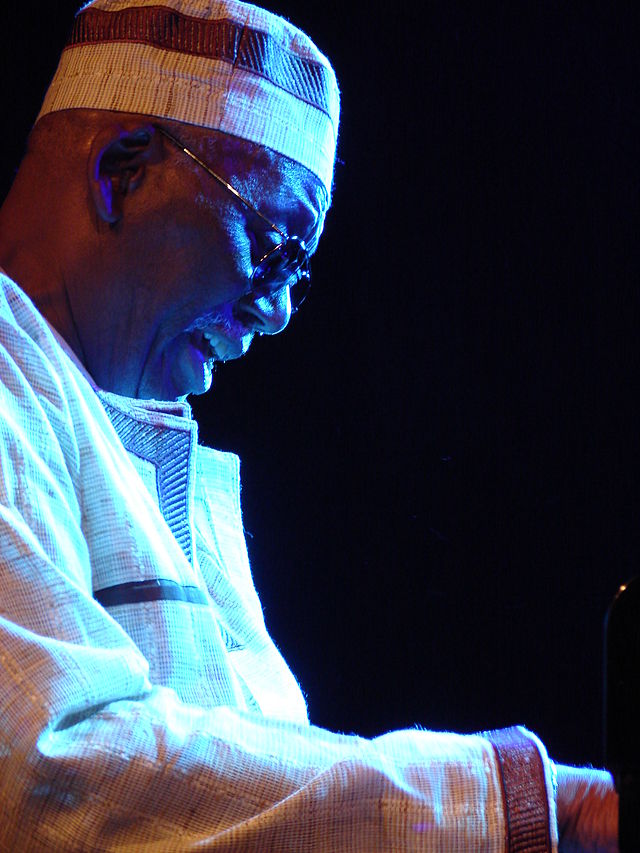 Randy Weston’s playing has stylistic nods to Duke Ellington and Thelonious Monk (paying tribute to both on his portrait albums), and yet he is very much an innovator of the jazz tradition in his own right. Jazz pianist Marian McPartland describes him as “one of the world’s great visionary pianists and composers.” Weston burst onto the New York scene in the 1950s, and has since carved a unique place for himself in American music. Growing up in the cultural milieu of Brooklyn, Weston was constantly surrounded by some of the biggest names in jazz: Max Roach, Cecil Payne, and Wynton Kelly was a cousin.

Most influential was Thelonious Monk who tutored Weston in his apartment. Knowing very well where jazz was going, Weston was one of the first to praise the ideas of Thelonious Monk, and his collaborations with female jazz pioneer Melba Liston are the stuff of legend. Liston’s arrangements on Weston’s seminal recording Little Niles (1958) are excellent, and that particular recording ventured towards the African fusion that would become part of Weston’s style. In the 1960s, Weston moved to Morocco, and African music and culture have since remained prominent in his music. This influence is exemplified by his teaming up with Liston as an arranger on Uhuru Afrika (1960, featuring Langston Hughes) and Highlife (1963).

In the 1970s Weston continued to prolifically record for various labels (including Polydor and CTI) while touring, largely in Europe. After a recording draught in the late 70s and early 80s, Weston returned with another bountiful period of studio recordings for Antilles and Verve, including the portrait albums, the ambitious African rooted The Spirit of Our Ancestors (1992), and a collaborative recording with the Gnawa Musicians of Morocco (1992). Weston continues to tour and record in the 2000s, often with his Randy Weston African Rhythms Trio.

In 2010, at 84 years old, Weston released the live album The Storyteller, which featured his African Rhythms Sextet. Weston’s contributions to jazz and culture have been acknowledged numerous times, as he received a National Endowment for the Arts (lifetime honour) as an NEA Jazz Master, various honorary Doctor of Music degrees (Brooklyn College, City University of New York), celebration concerts, and in 2011 he was the recipient of a Guggenheim Fellowship. Don’t miss the opportunity to see a jazz legend in person, as Weston comes to the Guelph Jazz Festival with his African Rhythms Trio (at River Run Centre’s Main Stage on Friday September 5th at 8 pm). For now, let these recording take you on an exciting journey from America to Africa, beyond, and back.

“Blues Moses” featuring Pharoah Sanders (The Spirit of our Ancestors, 1992):