On October 7, in a ceremony at the Roundhouse Community Arts & Recreation Centre, on behalf of the City of Vancouver, Mayor Gregor Robertson presented a Lifetime Achievement Award to one of Canada’s pioneering jazz improvisers, Al Neil. Alan Douglas Neil received this honour a few months after his 90th birthday. 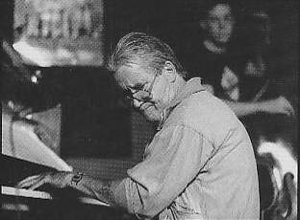 Pianist, composer, visual artist and author, Neil studied piano with Glenn Nelson and Jean Coulthard before shipping overseas to Europe with the Canadian Army in World War II. During the 1950s, Neil was a key member of Vancouver’s Cellar Club, playing with visiting artists such as Carl Fontana, Conte Candoli and Art Pepper. A milestone in the Canadian jazz discography is the 1959 Folkways record Kenneth Patchen Reads Poetry in Canada with the Alan Neil Quartet, which features the American poet accompanied by Neil on piano, Dale Hillary (alto saxophone), Lionel Chambers (bass) and Bill Boyle (drums).

Neil took a break from music in the early 1960s, but instead of returning to bebop, he resurfaced within a wider world of free improvisation, electronics and performance art, fusing them in a kind of performance that no one else had hitherto envisioned. His new trio featured two visual artists (Richard Anstey, bass and Gregg Simpson, drums) and some of its work was documented on the LP The Al Neil Trio Retrospective: 1965-1968, which has been expanded and reissued on CD by Blue Minor Records.

Under the editorship of poet Victor Coleman, Neil’s novel Changes was issued by Coach House Press in 1975 (reissued by Nightwood Editions, 1989) and in 1980 Pulp Press published his short story collection Slammer. He remained active into the 1990s collaborating with his life partner Carole Itter on performances and installations, and exhibiting his mixed-media collages. In 2008, Neil received an Honorary Doctor of Letters from Emily Carr University of Art and Design.

Al Neil can be seen on video in the 1963 National Film Board documentary In Search of Innocence, and David Rimmer’s 1979 film Al Neil / A Portrait.

An excerpt from In Search of Innocence spotlights Neil’s adventurous (but soon to be abandoned) post-bebop piano style, c. 1963, in a clip from the Cellar Club with Don Thompson (bass) and Glen Macdonald (tenor saxophone).