Last month featured one of the great architects of Afrofuturism: the one and only Sun Ra and his Arkestra. From Sun Ra to Janelle Monáe, Afrofuturism lets us know where we’ve been (from griot traditions and Egyptian pyramids and astronomy) to where we are going (mixing culture, technology, liberation, and imagination), particularly as a new generation of artists embody the movement’s philosophy and push jazz and hip-hop into new realms. As Afrofuturist Ytasha Womack writes of the movement, “It’s a way of bridging the future and the past and essentially helping to reimagine the experience of people of colour.” Few working DJs in the “beat scene,” particularly with mainstream recognition, embody the creative spirit of Afrofuturism as much as experimental electronic artist Flying Lotus, whose aunt is the legendary Alice Coltrane. He’s also the cousin of saxophonist Ravi Coltrane, and the grandson of singer/songwriter Marilyn McLeod (notable for writing Diana Ross’s “Love Hangover” and Freda Payne’s “I Get High (On Your Memory).”

Rather than letting his deep musical roots hold him down, Flying Lotus (Steven Ellison) forges forward, sounding futures and making music that uses past recordings–made live through scratching and remix–as sources for improvisation. Flying Lotus first came to recognition making beats for Cartoon Network’s Adult Swim, eventually releasing a full-length record in 2006 entitled 1983. His more recent releases include the albums Cosmogramma, and 2012’s sparse sounding and critically acclaimed, Until the Quiet Comes. Until the Quiet Comes displays the complexity of Ellison’s production, characterized by consonant and dissonant sounds, counterpoint, diverse shifts in tone and feel, and various improvisational modifications in mood, time signature, and overall structure. The psychedelic undertones, a mixture of downtempo jazz and post-rock ethos, add a dream quality to the album. Andy Beta of Spin described the record as the “dreams within dreams within dreams” concept of the 2010 film Inception while Karen Lawler of State insists that, “If the limbo between awake and sleeping, dreams and nightmares could be expressed through music, this album might well be it.”

Unique to Flying Lotus is how much sound he can get using a computer and digital production tools. Often he performs with live musicians (such as Ravi Coltrane) and his complex melodies, syncopated rhythms, and textured productions are largely a product of his own diverse interests. Some of his favourite albums, as he describes in one interview, include Alice Coltrane’s Lord of Lords; Radiohead’s Amnesiac; Charles Mingus’s Black Saint and the Lady Sinner, and J Dilla’s Ruff Draft. Stylistically, Lotus’s music reflects these diverse records, as Lotus’s albums contain free form jazz undertones and jazz-based patterns and time signatures. In 2010, Flying Lotus worked with the Ann Arbor Film Festival in a live scoring of the 1962 avant-garde film, Heaven and Earth Magic. Lotus continues to surprise his audiences with imaginative live performances and by remaining true to the cross-fertilization of ideas so present in Afrofuturism, Lotus (and the larger movement of young creative artists) continues to imagine possible futures. On October 6th, Flying Lotus will release his latest effort, an album that embraces his psychedelic, technological, and mind-bending Afrofuturism, You’re Dead! 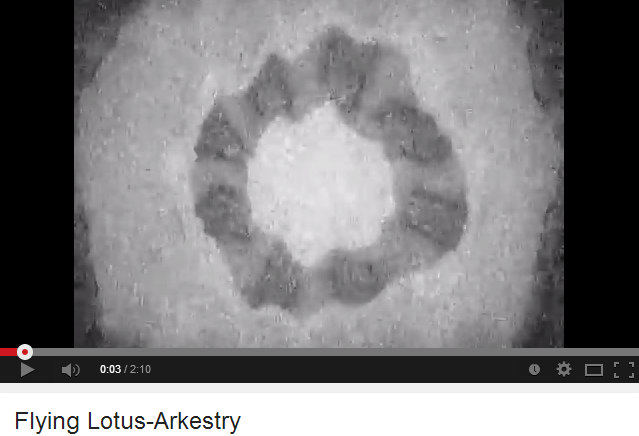 Also, check out his live performances with his Infinity band