Home » News » ImprovNotes on House of Dracula: “It Wasn’t Anything. I Was Just Improvising.”

ImprovNotes on House of Dracula: “It Wasn’t Anything. I Was Just Improvising.” 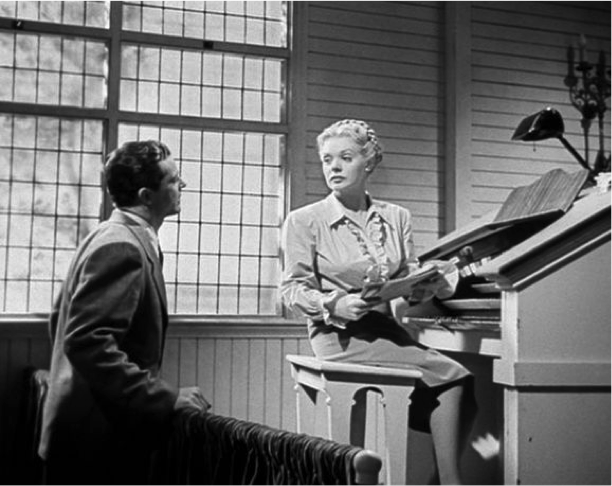 The response from readers was enthusiastic when, in the March 2015 Improv Notes, we described a sequence from the 1945 film House of Dracula that offered a unique context for the classical tradition of keyboard improvisation. This has encouraged us to continue to investigate Hollywood films, centring in the 1940s, when we find a recurring cinematic trope in which keyboard improvisation is directly linked to female agency. In House of Dracula, the pianist (played by Martha O’Driscoll) asserts her identity by playing Beethoven, although her ability to do so is threatened by Dracula’s hypnotic power. In this clip from Fallen Angel, also 1945, itinerant con man Eric Stanton (Dana Andrews), marooned in a small town on the California coast, sets out to seduce and marry the shy, reclusive June Mills (played by popular singer/actress Alice Faye) so that he can use her money to abscond with the alluring Stella (Linda Darnell), who works as a waitress in a beachfront diner. Approaching June when she is practicing alone in church, Eric exerts his charm to the fullest, but the seduction gets off to a shaky start thanks to his bogus assertion of musical knowledge, and to June’s unexpected reserve of personal resourcefulness. Indeed June’s facility in keyboard improvisation foreshadows, later in the film, her ability to adapt to changing circumstances in order to get what she wants.

Eric:  Very good performance, Miss Mills. Please go on. Beethoven never sounded so good before.
June: I wasn’t playing Beethoven.
Eric: No? Why sure, it was Brahms! The old boys do sound alike, don’t they? I mean in spots …
June: What “spots”?
Eric: You know: the way they begin, the way they end—sometimes in the middle, like the piece you were just playing, Brahms, uh …
June: It wasn’t anything. I was just improvising.
Eric: Well if Brahms didn’t write that, you went him one better!