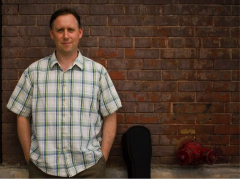 The Canadian improvising community has been saddened by the death of Toronto guitarist Ken Aldcroft, who suffered a fatal heart attack on the morning of September 17. IICSI wishes to extend our deepest condolences to Ken’s family and friends. He will be missed by many.

Originally from Coquitlam, Aldcroft was active in Vancouver before moving to Toronto in 2001. His arrival, and his impact as a teacher, composer, organizer, and improviser, as noted on his website, corresponded with the re-emergence of Toronto as an important centre for creative improvised music-making. He was a founding member, with Joe Sorbara, of the Leftover Daylight concert series in 2003, and of the Association of Improvising Musicians Toronto (AIMToronto) in 2005. The latter organization brought together Toronto improvisers, and enabled them to collaborate with such artists as Anthony Braxton, William Parker, Jean Derome, Joe McPhee, Eddie Prévost, Michael Moore, Andrew Haas, Malcolm Goldstein, and many others.

Aldcroft’s own compositions were most widely heard with his Convergence Ensemble, a sextet that included, in its most recent configuration, Karen Ng, Emily Denison, Scott Thomson, Wes Neal and Joe Sorbara. Aldcroft was also an outstanding solo guitarist: writing in Musicworks, Stuart Broomer noted that Aldcroft’s solo composition Parkdale Serenade “seems to take its cues from the linear harmonic extrapolation of conventional modern jazz guitar, but every note is subtly inflected, its pitch bending away from expectation.”

An instructor in jazz guitar in the School of Fine Art & Music at the University of Guelph, Ken was a beloved teacher and trusted colleague to many. He was well-known to the Guelph community, where he performed regularly. Ken’s contributions to the University were numerous. In addition to preparing students for regular juries, solo recitals, and ensemble performances, Ken performed in Faculty Showcases and was always reaching out to his colleagues. His latest project at the University, just one month ago, was a 4-day symposium on Teaching Creative Jazz and Improvising Guitar, bringing together some of the most creative guitarists in North America, complete with lectures, discussions, concerts, and the release of his brand-new CD, Ken Aldcroft & Mike Gennaro: Adidas and Shorts. As a member of the panel, Ken spoke with regret about the experience of many music students, who need exposure to as many different musical approaches as possible, yet often are confronted with an institutionalized pedagogy in which “improvisation is not mentioned, even discouraged.”

A recent example typifies Ken Aldcroft’s unselfish response towards opportunities to collaborate and make music. Just a few days before his death, Ken was discussing an upcoming Hamilton concert in an email thread with local musicians and Cem Zafir of zulapresents. The thread discussed presenting the concert at the Workers’ Arts and Heritage Centre (WAHC), and the possibility of adding another artist to the bill. Ken final words on the subject were:

“I am fine with WAHC.

I am fine if you want to add another artist to the bill.

A gofundme campaign has been started to help Ken’s son Liam, and partner Maria, through this difficult time: https://www.gofundme.com/2puqkypu