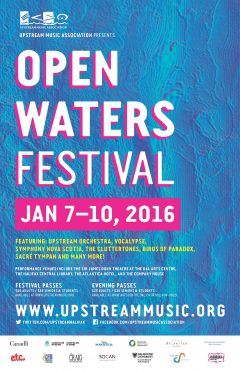 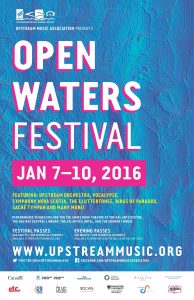 Open water…an area not enclosed by land, ice or other barriers, unprotected, exposed and influenced by a variety of environmental conditions, and with enough room to move and not be frozen in place.

The Open Waters Festival of new and improvised music brings together these qualities in musical performances, exploring the intersections of classical and jazz as well as experimental, undefined, and exploratory genres. Offering upcoming and celebrated Atlantic artists, presenting significant creative musicians from BC, Ontario and Quebec, partnering with Vocalypse Productions for an evening of new perspectives on ancient songs, and featuring a momentous collaboration between Symphony Nova Scotia and the improvising Upstream Orchestra, the Open Waters Festival aims to surprise and inspire! Enjoy.

Symphony Nova Scotia teams up with Canadian composer/conductor Gary Kulesha to explore current, emerging, and cross-genre symphonic music as part of the 2016 Open Waters New Music Festival. Featuring composers from Canada and around the world, this compelling concert includes an exciting variety of new works, ranging from the energetic Big Bang! Concerto to the jazz-inspired The Nameless Hour to the twelve-tone Concerto for Nine Instruments. 2015’s Open Waters concert was a sold-out success, so get your tickets early for this one-of-a-kind performance.

Amy Brandon’s solo guitar compositions and improvised pieces draw from the worlds of jazz, classical and experimental music. Sculptural and evocative, her music explores the boundary between the carefully composed and the freely improvised.

The Bird Project is a piece Arthur Bull and Norm Adams have presented and developed since about 2011. It is inspired by a verse from Arthur’s “The Lake Diary” (Emerson Street Press, 2010). Like the poetry, the music of The Bird Project examines and drifts between the layers of clear lake waters, the air above and the music of Charlie Parker.

Sacré Tympan is a Quebec ensemble and company, founded in 2005 by Pierre Labbé, a composer, saxophonist, flutist and free-thinker, and spans many facets of contemporary music, including innovative approaches for introducing children to new music and improvisation.

Pierre Tanguay, a percussionist, composer and optimistic inventor, is one of the most sought-after Montreal musicians on the Quebec scene. He moves freely between jazz and contemporary, medieval and traditional music.

Pierre Labbé is endlessly inquisitive. Through a singular approach to music, at once rebellious, passionate and free, the creators travel between contemporary music, contemporary jazz, musical tale, improvised music and object theatre, and do not hesitate to provoke the spectators’ ears.

Together, the two Pierres offer a sonic window into the intensely creative and consistently unique musique actually scene of Quebec.

Anteater brings together five of Halifax’s most sought after musicians and thrusts them into a high-intensity exploration of risk and chance. The music of Anteater ranges from dense and chaotic to delicate and free, both seething and soothing. Original & explosive. Andrew MacKelvie / Andrew Jackson / Adam Seto / Brendan Melchin / Casey Thompson

On Saturday afternoon in the Dunn Theatre six improvisators from different genres will be playing different instruments and performing a collective improvisation. The audience is invited to question the performers about the music played and the outcome. Lively discussion is sure to ensue as the musicians engage with the audience. The talk back is an initiative of the Guelph Jazz Festival and the recently-founded Institute of Improvisation Community and Studies in Improvisation with which Upstream Music is now associated.

The future is now! Come hear what the next generation of musicians has to say: the members of the Dalhousie New Music Workshop are exciting and bold young composers, performers and improvisers, and they will shake the house with surprising new works. This year, thanks to Upstream’s Outreach Program, we are very pleased to welcome special guest Jeff Reilly.

In this concert, in celebration of founding member and past Artistic Director – Paul Cram,  Jeff Reilly conducts the 21 piece Upstream Orchestra in works by Paul Cram, Barry Guy, plus and a world premier of his own work “The Engines of Time”. For a grand finale, the original Upstream Octet instrumentation is supercharged by the range and depth of Symphony Nova Scotia under the baton of the esteemed conductor Gary Kulasha for Paul Cram’s – The Point of Sympathy.

“…. A real treat was the set by Upstream Orchestra, 18 pieces from the Maritime Provinces of Eastern Canada…. an improvising orchestra with real depth and very strong conduction by Jeff Reilly….. Big chunks of Mingus, George Russell, the ICP and much else assembled itself into a squawk-swept landscape of brilliant playing” Victoriaville Festival 2013   The Wire (UK)

The Cluttertones – Toronto
The Cluttertones play “otherworldly chamber music.” It is jazz with an experimental ethos—open to subtlety, a sense of adventure, and diverse influences. Improvisation is an important element. We play with the intention to explore sonic worlds, and to engage with fellow humans on a deep level. The musicians directly inform the compositions: their skills, personalities, and musical characters are intrinsic to the orchestration.   The Cluttertones are Lina Allemano (trumpet), Rob Clutton (bass, composition), Ryan Driver (voice, synth, piano), and Tim Posgate (banjo, guitar).   “Clutton composes pieces that begin with the improbable and sometimes approach the uncanny, strange states of musical mind in which the heterodox elements seem to tune calmly to a new standard.” – Stuart Broomer, Whole Note   “The Cluttertones trade in a sort of weirdness and beauty you’re very unlikely to have encountered before.” – Nick Storring, Musicworks

Exploring the balance between sound and motion, gesture and rhythm, intention, improvisation and inspiration, this pairing of one of Halifax’s premiere creative percussionists Doug Cameron with the accomplished and ambitious dance artist Jacinte Armstrong, this pairing promises to shake foundations.

Doug Cameron is an award winning jazz and improv drum set player, instructor and composer. He is passionate about Halifax’s creative music scene and performs with Upstream Music and is on faculty at the Creative Music Workshop. When not playing with Halifax-based The New Bridge he can be heard performing with improvising jazz trio Monk OFF and is a founding member of the improvising dance/music/art collaborative the Expanse.

Jacinte Armstrong is a Halifax-based dance artist, choreographer, improviser, and teacher who has worked with many collaborators locally and across Canada. She is the Artistic Director of Kinetic Studio, and as a dancer, she performs with Mokena Dance, SiNS dance, and in her own work. Her choreography ranges from traditional to multi-disciplinary, including collaborations with musicians, architects and computer programmers.

Birds of Paradox was formed in 2007 to explore the fusion of composition and improvisation, incorporating three very distinct voices and cultural backgrounds into a creative whole. Guitarist Ron Samworth is an inventive textural improviser and a strong fluid melodicist, informed and inspired by a variety of music traditions including jazz, rock, new music and folk music of many cultures. Lan Tung creates new vocabularies on the erhu/Chinese 2-string violin, drawing inspiration from her background in Chinese music and various other genres: from creative improvisation, western contemporary music to various ethnic styles, such as Indian, Flamenco and Middle Eastern. Neelamjit Dhillon is equally versed as a tabla player in Hindustani classical music and as a jazz musician on the saxophone. Its debut CD Birds of Paradox has been nominated for Western Canadian Music Award and Independent Music Awards. Halifax bassist Lukas Pearse will join the band at this concert.

(Un)Forgotten Voices – Le Tombeau de is a multimedia show based on the work of Canadian folklorist Marius Barbeau (1883-1969), who many consider the father of Canadian ethnomusicology. In the first half of the 20th century, Barbeau collected thousands of songs, tales and artifacts all across Canada. Even though some aspects of his legacy are now considered controversial and therefore disputed, the fact remains that he is responsible for gathering and preserving a cultural heritage that might be otherwise unknown to most of us.  The show represents Jérôme Blais’ very personal commentary on Barbeau’s work, in particular the massive collection of wax roll recordings found at the Canadian Museum of History. It is sung in several different languages: French (from Quebec and Acadia), Huron-Wendat (Quebec, Oklahoma), Maliseet, Tsimshian (northern coast of British Columbia) and English.

Some people say that improvised music is the first music; all genres of music were improvised first and then qualified over time as musicians and listeners evolved with the music. This process dates back to our first ancestors who stood on two feet 7 million years ago. Some people could even go so far as to say improvisation is the original folk music. Some people could say that.

“Improviser, composer, educator and guitarist Geordie Haley will be hosting and curating an open invite improvisation session at the Company House. Celebrating the end of another amazing weekend of new music brought to you by Upstream Music Association’s OPEN WATERS FESTIVAL.”