“There’s Something About the Look”: Thomas King in Conversation with Dionne Brand

Thomas King is one of Canada’s most prolific writers: a renowned novelist, a broadcaster (The Dead Dog Café Comedy Hour), a screenwriter, a onetime NDP electoral candidate for Guelph in 2008, an astonishing photographer, and the first person of aboriginal descent to be chosen to give the Massey Lectures (in 2003). His latest book, The Inconvenient Indian: A Curious Account of Native People in North America (2012), shares his extended reflection on Native identity through history, humour, and King’s incredible personal meditations. As King says (and which is quoted in nearly every essay about his work), “the truth about stories is that that’s all we are” (The Truth about Stories 2). Given his ability to balance so many creative forms of expression, it is fair to call King a consummate improviser par excellence. He is indeed a master storyteller with a unique ability to connect various relations together to create a complex weaving that animates his active desire to find moral harmony in an often-inharmonious world. As King explains, the First Nations term “all my relations” is “an encouragement for us to accept the responsibilities we have within this universal family by living in a harmonious and moral manner” (All my Relations ix)—a reminder of the responsibility we have to our families, the natural world, and (by extent) our fellow human beings. This view of the world is one that brings about change through actions, and works towards building a better future; there are two choices: “a world marked by competition or a world determined by co-operation” (Stories 25). And while King is best known as a storyteller and novelist, he is not as well known, although perhaps he should be, for his ability to tell narratives through photography.

Before King became a writer and an academic, he was telling stories through photography, working in the 1960s in a commercial studio in Auckland, New Zealand, and then for Australian Consolidated Press, further developing his skills after arriving in Canada in 1980, eventually capturing much of the history of the Guelph Jazz Festival through his photos (Martinez 27-30). King’s photographic chronicling of the history of jazz and improvised music in Guelph tells a story about the nature of the music, as well as the power of inspiring collaborations. King provides an acute behind-the-scenes perspective of the Guelph Jazz Festival: his photography ties together the various “relations” of the festival, and his candid portraits of artists are stories unto themselves. In this month’s Oral History, Dionne Brand (ICASP Advisory Board Member and a master-storyteller in her own right) sits down with the Governor General Award-winning author Thomas King to discuss King’s photo exhibition, “Sound Check: The Jazz Photography of Thomas King.” Brand and King discuss King’s early career as a photographer before he achieved fame as a writer, his approach to photography, the techniques he employs, and the background to some of the photos highlighted in the exhibition. In Fall, 2013, the exhibit at the Macdonald Stewart Art Centre included selections from his 20 years of photographing the Guelph Jazz Festival. King’s photos were also displayed at the Boarding House for the Arts during the Guelph Jazz Festival & Colloquium, 2013. The exhibition catalogue was also published in Fall 2013. It contains a jointly written foreword by Ajay Heble and Dawn Owen, an interview with Thomas King by Dionne Brand (featured here), an essay by Mauricio Martinez, and a biographical profile by Christine Bold. Get your copy today at MSAC and enjoy the interview. 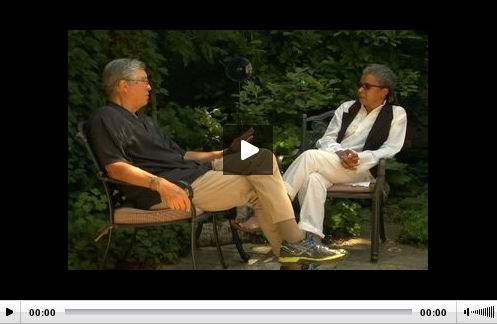