Oral Histories is a showcase of interviews, performances, and articles by and about improvising musicians, artists, writers, and scholars. This monthly feature offers an intimate look inside the minds and practices of some of the many dynamic, innovative people whose energy and ideas make improvisation studies such a vibrant field of inquiry. The Oral Histories project provides a space for improvising artists to be heard in their own words, often in dialogue with other improvisers, scholars, and practitioners.

Wayde Compton is a Black Canadian writer/poet, DJ, and historian, born and raised in Vancouver, British Columbia. Compton has published two books of poetry: 49th Parallel Psalm, and Performance Bond. He has also edited an anthology, Bluesprint: Black British Columbian Literature and Orature, and recently a collection of essays entitled, After Canaan: Essays on Race, Writing, and Region. He co-founded Commodore Books, the first black-oriented press in Western Canada, with David Chariandy and Karina Vernon in 2006. He’s also been involved with the recovery of Hogan’s Alley in Vancouver, a historically black neighbourhood that was removed in the 1960s for a highway. Compton co-founded the Hogan’s Alley Memorial Project in 2002, a grassroots organization that archives the history of Vancouver’s black community. Along with his published writing, Compton is known for his engaging and improvisational approach to reading his work, often performing turntable-based sound poetry with collaborative partner, DJ Jason de Couto. Currently Compton is the director of The Writer’s Studio, a creative writing program in Continuing Studies at Simon Fraser University.

In his essay, “Turntable Poetry, Mixed-Race, and Schizophonophilia,” Compton describes “schizophonophilia” as the “love of audio interplay, the pleasure of critical disruptions to natural audition, the counter-hegemonic affirmation that can be achieved through acoustic intervention.” The notion of acoustic intervention is a pleasant reminder that democracy can be embodied in sound, and is often most effective when it is most discordantly free. Such sonic dialogism is also the embodied reality of a history and culture in flux, as Compton describes in Bluesprint how British Columbia’s “black history has been one of continued exodus, immigration, settlement, exploration, miscegenation, communitarianism, integration, segregation, agitation, uprooting and re-rooting and re-routing.” In this month’s Oral History, Paul Watkins sits down with Wayde Compton in his office in Vancouver for a personal and engaging interview. They discuss a wide range of topics, including Black British Columbian history and the historical black community of Hogan’s Alley, along with identity and race, improvising Blackness, Compton’s literary influences, the importance of tradition, formal and stylistic innovations, Kamau Brathwaite’s notion of tidalectics (a cyclical interpretation of history), multiculturalism, the role of the DJ as archivist, hip-hop and jazz music and culture, among other multifarious topics.

Lastly, embodying the notion of “schizophonophilia,” the interview is available in its original unedited format, as well as in three sonic remixes. The first remix (“Schizophonophilia Mix”) takes various sound clips from the interview and collages them with assorted mixed productions from DJ Techné (Toronto-based turntable sound artist, Paul Watkins). At the end of the interview, Wayde Compton reads a short prose piece, “British Columbian Blues,” which is remixed in two versions: a version that features David Lee improvising (in a single take) on bass, and a remix once again by DJ Techné (using various Jimi Hendrix samples) and Lee’s bass.

Download the full unedited audio of the interview, here. 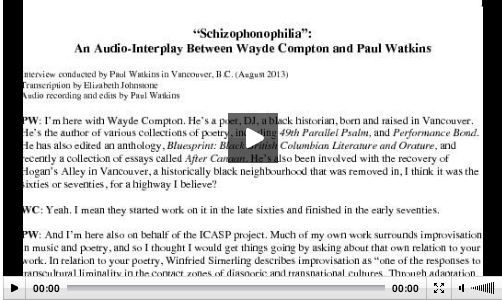