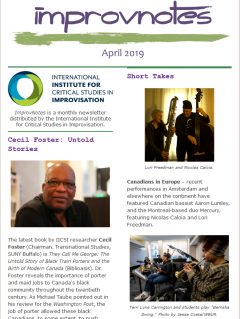 Canadians in Europe – recent performances in Amsterdam and elsewhere on the continent have featured Canadian bassist Aaron Lumley, and the Montreal-based duo Mercury, featuring Nicolas Caloia and Lori Freedman. 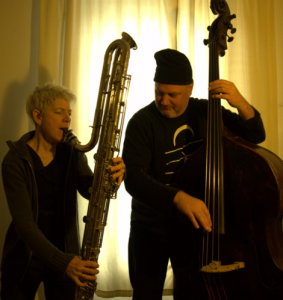 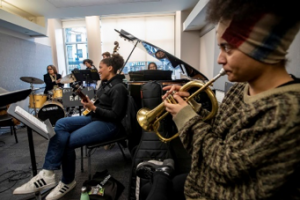 Berklee’s new Institute of Jazz and Gender Justice, introduced in last October’s ImprovNotes, was recently profiled by Boston’s WBUR Radio. The piece’s author, Amelia Mason, quotes the institute’s founder, drummer Terri Lyne Carrington, who is now mentoring a new generation of young female improvisers: “Because it’s been such a male party for so long, I think young women feel like they’re being invited into a club or into a party,” Carrington says. “And I would like for them to feel more like they’re throwing the party.”

Jazz Education in Research and Practice is a new journal from Indiana University that will explore diverse topics of jazz scholarship and its applications to pedagogy, providing a forum for interaction and exchange between researchers and practitioners grounded in scholarship. The journal aims to explore the ways that a wide range of perspectives, from musicology to cultural studies, from psychology to business, can be applied to the field of jazz education. The editors particularly welcome articles that provide models, resources, and effective techniques for the teaching and learning of the art form. The submission deadline for the flagship issue is May 6, 2019. 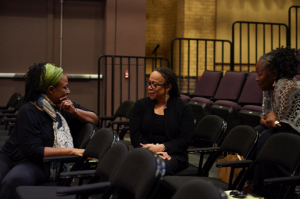 Dædalus: Why Jazz Still Matters – Drawing on the resources of the American Academy of Arts and Sciences, the quarterly journal Dædalus features multidisciplinary, authoritative essays centered on a theme or subject.

Their spring 2019 issue, edited by Gerald Early and Ingrid Monson, is titled “Why Jazz Still Matters.” It includes essays by Farah Jasmine Griffin, Gabriel Solis, Christopher J. Wells, Kelsey A.K. Klotz, Judith Tick, Krin Gabbard, and Carol A. Muller as well as the editors, and can be ordered online.

An opening reception for the exhibition “Pauline Oliveros: Still Listening in Kingston” was held at the Kingston, New York, city hall on April 6. 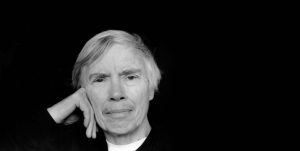 Mounted in collaboration with IICSI, the exhibition features visual representations of music created or inspired by Oliveros by 23 different artists. Kingston has named the small park in front of city hall the Pauline Oliveros Deep Listening Park.