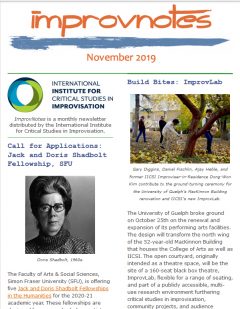 Do you have great ideas for concert performances that you’d like to curate? Kitchener/Waterloo’s NUMUS Concerts is seeking submissions to its fifth annual Emerging Curator Competition. This competition is open to artists up to 29 years old OR current undergraduate students (of any age) of post-secondary institutions OR individuals (any age) who have completed an undergraduate program within the last 2 years.

The International Society for Improvised Music (ISIM) will hold its 12th Festival / Conference at the University of Melbourne, Australia June 3-7, 2020. The event marks the 40th anniversary of the Jazz and Improvisation Department at the Melbourne Conservatorium and coincides with the Melbourne International Jazz Festival. The ISIM invites presenters to propose musical performances, academic lecture presentations, workshops, or other forms of creative experimentation. For more information, and to apply by the December 6 proposal deadline, visit the ISIM website.

Jazzfest Bonn has launched the JazzBeet Competition, aimed at musicians born on or after January 1st, 1991 who are studying jazz at international universities, or working in permanent trio formations. Ensembles must offer an approximately 40-minute program that includes at least one piece of music inspired by or pertaining to the works of Ludwig van Beethoven. All styles of modern and contemporary Jazz are permitted, and original compositions are a requirement. Application deadline is November 30.