Play Who You Are

The International Institute for Critical Studies in Improvisation (IICSI) launched two new video Stories of Impact featuring Play Who You Are partnership alumni, Talia and Katy, on Friday, September 15th, 2017, as part of the 2017 Guelph Jazz Festival Colloquium, “Partnering for Change: Learning Outwards from Jazz and Improvisation.”

The final day of the 2017 Guelph Jazz Festival Colloquium was mainly devoted to reflecting on and celebrating Play Who You Are (PWYA), a ten-year partnership between IICSI, KidsAbility Centre for Child Development, the Guelph Jazz Festival, and Rainbow Day Camp. The Stories of Impact were screened in front of the Colloquium audience, which included parents, families, youth, and staff from KidsAbility. Both Talia and Katy, whose stories are available below, were in attendance. 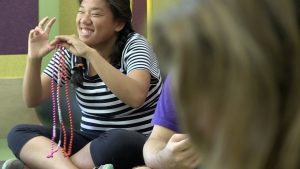 IICSI’s Stories of Impact are a new series exploring IICSI’s research and the wide-ranging impacts on participants of engagement with improvisation. The production of the videos is supported by funds received for the Social Sciences and Humanities Research Council of Canada Impact Award for Partnerships, received in 2016 by Institute Director Ajay Heble, on behalf of the Institute’s many researchers and partners.

Play Who You Are seeks to bring world-class improvising musicians into creative collaboration with youth with special needs. Musician-facilitators work to develop the youth’s musical skills, confidence, and repertoires. The workshops culminate in a free, public, performance during the Guelph Jazz Festival.

If people talked the way they [play] in improvisation, then I think the world would be a lot nicer. – PWYA Youth Participant 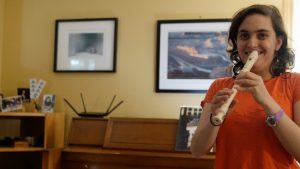 This longstanding, community-engaged, arts-based research collaboration has explored a range of topics including teaching practices for community improvisation, and improvisation across levels of ability. For example, see “Say Who You Are, Play Who You Are,” a collaboratively authored paper. This has been a cornerstone partnership at IICSI’s Guelph site, and has involved countless musicians, students, researchers, support persons, and youth with special needs. Research has shown that youth develop self-confidence and self-expression from their participation in the PWYA workshops. Youth are able to take risks in a safe environment, and describe satisfaction at tackling new challenges and meeting their goals. The workshops disrupt conventional notions of dis/ability and deepen community cohesion and understanding.

Talia Baskin Kesselman was a participant in the Play Who You Are Workshops from 2008-2013. Her Story of Impact video was made by Guelph-based documentary filmmaker Erin MacIndoe Sproule. Stories of Impact is the second project Erin has worked on with Talia, having created a short documentary in 2016 that profiled J.O.E. Coffee at the Guelph Public Library, where Talia works. Erin would like to thank Talia, her parents Amy + Jack, and The OK Chorale-ers for their participation in this project. She would also like to thank IICSI for directing resources towards telling these kinds of stories and allowing for space to listen to voices that may not always be heard.

Erin MacIndoe Sproule has a BA in Radio and Television Arts from Ryerson University and a Masters in Fine Art Photography from the Instituto Europeo di Design in Madrid, Spain. She is the Creative Director of Anthroscope Media, an independent documentary production company that explores the human experience through film.

Katy was a participant in the Play Who You Are Workshops from 2008-2013. Her mother, Barbara, is an enthusiastic supporter of Play Who You Are and of the partnership as a whole. She points to the workshops as important not only for the youth who participate in them, but also for the community at large. Katy’s Story of Impact video was made by Dawn Matheson, an interdisciplinary artist and writer. Dawn works in video, radio, art installation, community collaboration, performance, and print. This is the second video she has made about Katy. Dawn’s first video about Katy, “Katy’s Song,” was released as part of a DVD accompaniment to “Things you hope a human being will be,” a short book profiling musician Jane Bunnett’s stint in Guelph as the 2011 Improviser-in-Residence.

For more information about the International Institute for Critical Studies in Improvisation’s Stories of Impact, please contact IICSI by email at [email protected]