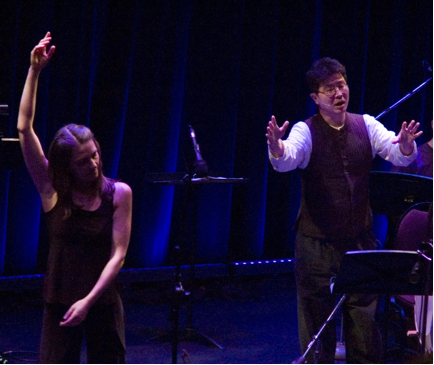 Improviser-in-Residence, percussionist and folklorist Dong-Won Kim celebrated his fall residency in Guelph with a November 29 concert at the River Run Centre. He teamed up with Guelph-based collaborators including the Guelph Symphony Orchestra (directed by Judith Yan), the Guelph Youth Jazz Ensemble (directed by Brent Rowan), dancer Georgia Simms, and musicians Jeff Bird, Daniel Fischlin, Lewis Melville, and Ben Grossman, who played the part of storyteller.

When Rivers Meet brought together music, dance, story, visuals, and (of course!) improvisation to create an hour long performance, bridging the on-stage world of the performers with the off-stage world of the audience. Throughout his residency, Dong-Won has given numerous performances, workshops and classes in Guelph and Waterloo.

South Korean percussionist Dong-Won Kim is the 2014 Improviser-In-Residence, a joint initiative between IICSI, Musagetes, and the Laurier Centre for Music in the Community.