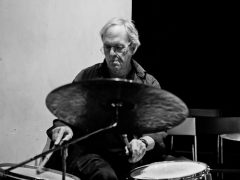 After a brief struggle with cancer, John Heward, one of Canada’s most profoundly creative improvisers, passed on November 6th, 2018. Internationally known as both a drummer and a visual artist (working primarily in painting and sculpture), his work in both media changed the Canadian artistic landscape. It is sometimes said that he painted like a drummer, and drummed like a painter. I think John would deny the implied opposition between the media to begin with and would instead draw our attention to what drove his creative practice in all media—a deep and abiding exploration of freedom, with all the responsibilities and possibilities that freedom can offer. John’s art embodied many of the principles and practices of improvisation that have characterized IICSI’s and ICASP’s theorizing, and stood as a corrective to less subtle and less accurate characterizations of the improvisatory. John’s music and visual art, far from being haphazard, random, aleatory, or mindlessly spontaneous, is deeply personal, intentional, careful, and thoughtful. For John, freedom in art was a place to inhabit and explore, a way of being with not just aesthetic potentials, but with ethical and moral characteristics. Nor did John see an opposition between the abstraction characteristic of the improvisatory and figuration or structure. For John, freedom meant all artistic choices were up to him (and others who choose to inhabit the free), regardless of what sort of images or sounds might result.

John’s many-decade inhabitation of the free resulted in his creation of a creative practice and space that was highly welcoming to others, whether it be fellow artists/improvisers or viewers/audience members (or, indeed, family, friends, or even strangers). And so his Abstraction paintings invite the viewer to physically manipulate them, to enter into dialogue with them, and so to give them new and perhaps unforeseen meanings. John created a way of producing visual improvisations, not just paintings that can be seen as the product of improvisatory thinking (as with, say, action painting), but which can inspire truly improvisatory interactions with viewers. New ways of seeing are therefore not so much presented but discovered by the viewer in dialogue with the work itself. These features were also foregrounded in his musical practice. John was deeply committed to free improvisation, and in creating community based on its principles of dialogicality, mutual respect, exploration of the other, and ethical living. As a player he exemplified these positive features of the improvisatory. John never shouted as a drummer; he was a careful and deep listener and made all those he played with sound both better and more appropriate to the sonic setting. He could lead without leading, suggest without suggesting, command (if need be) without commanding. He taught others, including myself, how to approach musicking with both humanity and humility. And these sonic expressions of community-building transferred directly into more robust acts of community formation. In Montreal, John was a mentor to generations of improvisers. The home he shared with his life partner and artist Sylvia Safdie on Murray Street vibrated to the sounds of improvising sessions multiple times a week. The Murray Street Band was not so much a fixed ensemble as the name given to an ever-changing, contracting, and expanding group of improvisers, intergenerational, with varied degrees of instrumental virtuosity, from diverse musical backgrounds, but all willing to “live free” with John while playing. Many improvisers were birthed at Murray Street, so to speak, as  a result of John’s openness, and almost every member of the vibrant Montreal improvising scene spent some time there.

It would be a mistake to think that John’s openness was merely an expression of his lack of standards or critical criteria. Far from it—John actually had a demanding aesthetic, but not one that required traditional technique, virtuosity, or talent. It required a personal sound and a willingness to meld into an ensemble by listening and saying something meaningful, however it might be said. This feature of John was recognized by others, and while he was never one to tour or travel much to perform, he collaborated closely over the years with renowned improvisers equally known for their capacity to “say something,” such as Steve Lacy and Joe McPhee. And so Murray Street was, among other things, a place where improvisational pedagogy was developed and practiced. John’s unique style of drumming had a way of always suggesting how things might go, without demanding that they go that way. He presented choices to his fellow improvisers, but always allowed the choices to be made by others. Indeed, he did this so artfully that you would often feel like the choices on offer were generated by yourself, only later to perhaps realize that John was constantly placing before you sonic possibilities, shining a light on different particular parts of the freedom where he lived. This generosity of improvisatory spirit carried over into a more general generosity—he was a loyal friend to many, a driving force behind concerts, festivals, and individual careers, and he was an artistic lodestar who guided so many members of Montreal’s rich and vibrant improvising community.

John’s art, both musical and visual, was an art of the small gesture, of subtle differences, a product of paring down many possibilities to the precise one appropriate for the occasion or media. He was neither an improviser or artist who threw many ideas, actions, figurations, and motifs at the viewer, hoping one would find traction. He took the far more risky route of drawing the viewers’ attention to a particular gesture—visual or sonic—one laid bare in the open for perusal, whose adornment was its lack of adornment. Such an aesthetic gambit places a premium on the precise correctness—the “just so” nature of the choice made. Whether it was a single brush stroke across an unprepared canvas, or a single-snare shot punctuating a sonic space, John’s choices were direct and spoke directly to viewers and auditors. This minimalism, often said to be characteristic of both his visual and musical work, turns out to be a courageous gift to others and a form of maximalism, inviting us to explore in all its most minute detail the significance of a single gesture and its relationship to those others surrounding it. At its most effective (and John’s work was almost always at its most effective) such gestures take on meaning and significance seemingly magically, given the parsed-down nature of the gesture itself. One of John’s massive Abstractions, hung from the ceiling, would charge a space with energy, and reconfigure the viewers’ whole relationship to a space. Similarly the smallest of drum riffs from John would often signal a complete sonic transformation in an improvisation, as if he were able to see the whole teleological arc of the musical form being developed in real time and resolve it with the most minimal, yet precise gesture.

John’s “maximal minimalism” spilled over into his life. He was not a loquacious man, but what he said was carefully chosen, and often had far more effect and meaning than the more lengthy utterances of others. His many acts of kindness and generosity were never wrapped in public displays, but took place quietly and directly. The risks and difficulties of such an artistic and moral life sometimes took their toll on John. It is hard to live in the free responsibly, yet his commitment to the free, to letting vibrations in sound and space speak for themselves, was steadfast.

I could imagine no better guide through the spaces of freedom for myself and many, many others than John. He pointed a way, but not the way, allowing and inviting us to take our own path—paths we would often take knowing John’s support would be there. In many ways, his was a philosophy of improvisation enacted in sound, space, and life, so it is no surprise that he was a student of philosophy and of that most minimal yet maximal of philosophers, Heraclitus. It therefore seems fitting to end with a selection of fragments of Heraclitus that John took to heart, animating in his life and art:

Eyes and ears are poor witnesses for people if their souls do not understand the language.

Much learning does not teach understanding

The hidden attunement is better than the obvious one

One who does not expect will not find out the unexpected

I went in search of myself…….