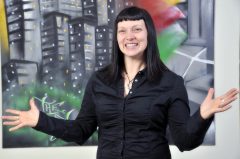 Dr. Charity Marsh is a Tier II Canada Research Chair in Interactive Media and Popular Music in the Faculty of Fine Arts at the University of Regina.

Dr. Marsh earned a BMUS in Musicology, Theory, and Performance (1996) as well as a Bachelour of Arts with a concentration in Women’s Studies and a minor in German (1997) from the University of Ottawa. From York University she earned her MA (1998) in Women Studies problematizing the dynamic and contested relationship between nature and technology in the Icelandic artist, Björk’s 1997 album Homogenic. In April 2005 Dr. Marsh successfully defended her thesis entitled, “Raving Cyborgs, Queering Practices, and Discourses of Freedom: The Search for Meaning in Toronto’s Rave Culture”, completing her Ph.D. requirements for the doctoral program in Popular Music Studies and Ethnomusicology at York University.

In July 2007 Dr Marsh was awarded a Tier II CRC position in Interactive Media and Performance. Her research program focused on interactive media and performance and how cultures and practices associated with this broad category contribute to dialogues concerning regionalism, cultural identity, and community specifically within western and northern Canada, and more generally on a global scale.

In 2007 Dr. Marsh was awarded a Canadian Foundation for Innovation Grant and a Saskatchewan Fund for Innovation and Science grant to develop the Interactive Media and Performance Labs as a way to support her ongoing research. With the development of IMP Labs at the University of Regina, the emphasis of her research and arts practices included the following areas: 1) Canadian (Indigenous) Hip Hop Cultures; 2) DJ Cultures including EDM, Club-Culture, Rave Culture, Techno, Psy-Trance, on-line, community, and pirate radio; and 3) Isolation, Identity, and Space: Production and Performance of Popular Music in Western and Northern Canada.

In July 2012 Dr Marsh was awarded a second term as a Tier II Canada Research Chair, this time in Interactive Media and Popular Music. The change in title takes into account the importance of popular music in Dr. Marsh’s research program, and her emphasis on Indigenous Hip Hop Cultures.

In 2012/13 Dr Marsh was awarded another Canada Foundation and Innovation grant to expand the IMP Labs to include the Centre for Indigenous Hip Hop Cultures and Community Research, as well as the Popular Music and Mobile Media Labs.