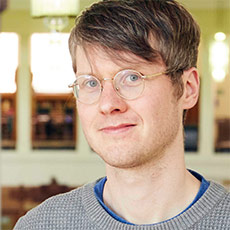 Christopher Haworth is a Lecturer in 20th and 21st Century Musical Studies at University of Birmingham. His research interests include experimental and ‘underground’ musics, electroacoustic and computer music, and media art, which he researches using a mixture of ethnographic, historical and theoretical modes of inquiry. His current research project focuses on the musical uses of computer networks, including the internet, from the late 1970s to the present. A strand of this work, an intervention into ‘digital musicology’, uses digital social network analysis methods to visualise and analyse the changing social, communicative, aesthetic and discursive uses of the internet across a range of electronic music genres spanning a period from the mid-1990s to the present.

Christopher also composes and improvises music using computers. His Ph.D. explored the the use of psychoacoustic phenomena in music, and he has published widely on the use of ‘auditory distortion products’ (combination tones) as musical material in computer music.