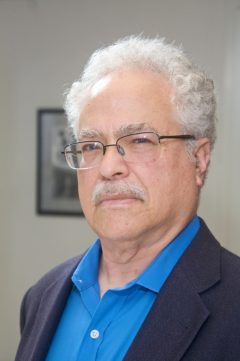 George Lipsitz is Professor of Black Studies and Sociology at the University of California, Santa Barbara. Along with Daniel Fischlin and Ajay Heble he is co-author of The Fierce Urgency of Now: Improvisation, Rights and the Ethics of Co-Creation. Lipsitz has authored (among other books) How Racism Takes Place, The Possessive Investment in Whiteness, Time Passages, Dangerous Crossroads, Footsteps in the Dark and Midnight at the Barrelhouse.  He serves as editor of the Insubordinate Spaces series at Temple University Press, as editor of the comparative and relational ethnic studies journal Kalfou, and as co-editor of the American Crossroads series at the University of California Press. Lipsitz serves board chair for the African American Policy Forum and for the Woodstock Institute.  The American Studies Association awarded him the Angela Y. Davis Prize for Public Scholarship in 2013 and the Bode-Pearson Prize for Career Distinction in 2016.