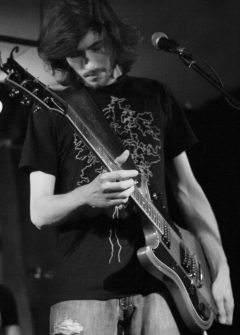 Hubert Gendron-Blais is a musician, author and researcher working at the confluence of philosophy, music and politics, with a particular attention to the concepts of affect, community and ecology. His work have been published in Organised Sound, Ephemera, Liminalities and Inflexions, among others, and in the book Révolutions et contre(-)pouvoir (ed. B. Coutu). He recently obtained a Ph.D. in Humanities from Concordia University (Montreal), under the supervision of Erin Manning, Sandeep Bhagwati and Sophie Bourgault. His doctoral studies on the contribution to sound and music to the affective intensity lived in common, approaching transversally the autonomous demonstrations and the collective music creation, are actually deepened through a postdoctoral fellowship in Philosophy (research-creation) at McGill University, under the supervision of Eric Lewis. In music, Gendron-Blais is the initiator of the Devenir-ensemble, a musical assemblage working in comprovisation from ambient sounds. He is also taken in a creative process with the experimental band -ce qui nous traverse- (Cuchabata Records), whose last album has been supported by the Canada Council for the Arts, while pursuing its own sound experimentations in “solo” (some of his pieces have recently figured on compilations by the label Jeunesse Cosmique, Mtl.Drone and the Dark Outside project). Gendron-Blais has performed in festivals, conferences and concert series in various events across Canada, France, Belgium and United States.