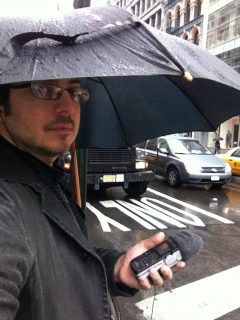 Jason Stanyek teaches at the University of Oxford where he is Associate Professor of Ethnomusicology and Tutorial Fellow at St. John’s College. Before arriving to Oxford he was Assistant Professor at New York University, Visiting Associate Professor at Harvard University, and External Faculty Fellow at the Stanford Humanities Center. His research on improvisation, on music technology, hip hop, and on Brazilian music and dance has appeared in a range of publications. The two-volume Oxford Handbook of Mobile Music Studies (co-edited with Sumanth Gopinath) was published in 2014. He currently serves as general editor for Bloomsbury’s new series 33 1/3 Brazil, an offshoot of their long-running 33 1/3 series, and as co-editor (with Julian Johnson) of the Cambridge UP journal Twentieth-Century Music.

IICSI researcher Jason Stanyek, University Lecturer of Ethnomusicology and Tutorial Fellow at St. John’s College, explains how his work is related to improvisation, why he is so passionate about his research, and why it is important to society and the humanities.