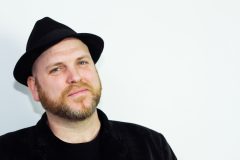 Jesse Stewart is a composer, percussionist, visual artist, researcher, and educator. His music has been documented on over twenty recordings including Stretch Orchestra’s self-titled debut album, which was honoured with the 2012 “Instrumental Album of the Year” Juno award. He has performed and/or recorded with musical luminaries including Pauline Oliveros, Hamid Drake, William Parker, Joe McPhee, David Mott, Dong-Won Kim, and many others. His music has been performed at festivals throughout Canada, in Europe and in the United States and he has been widely commissioned as a composer and artist. His writings on music and art have appeared in such journals as American Music, Black Music Research Journal, Contemporary Music Review,Intermedialities, and in numerous edited anthologies.

He is a professor of music in Carleton University’s School for Studies in Art and Culture and an adjunct professor in the Visual Arts program at the University of Ottawa. In 2013, he received Carleton University’s Marston LaFrance Research Fellowship. He has also received numerous teaching awards including the 2015 Carleton University Teaching Achievement Award, the university’s highest honour in recognition of teaching excellence, and in 2017 he was given the International Desire2Learn award in Teaching and Learning. In 2014, he was named to the Order of Ottawa. Aside from his contribution to academia and music, Jesse is passionately dedicated to strengthening his community, which led him to create the We Are All Musicians project, which is dedicated to making music as broadly accessible and inclusive as possible.