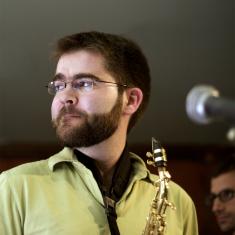 Saxophonist and ethnomusicologist Mark Laver is Assistant Professor of Music at Grinnell College, where he directs the jazz band and teaches classes on jazz and popular music. As a performer, Dr. Laver has shared the stage with such leading jazz and improvising artists as Lee Konitz, William Parker, Dong-Won Kim, Seamus Blake, NEXUS, Kurt Elling, Eddie Prévost, Hugh Fraser, and Phil Nimmons. He has also been a featured soloist with the Kingston Symphony Orchestra, the Guelph Symphony Orchestra, the Royal Conservatory Orchestra, and the University of Toronto Wind Ensemble. He was profiled in the “Canadian Rising Stars” issue of The Music Scene/La Scena Musicale in 2005.

Dr. Laver’s current research focuses on the intersections between jazz, improvisation, and neoliberal capitalism. His book, Jazz Sells: Music, Marketing, and Meaning(forthcoming with Routledge in the winter of 2015), explores the use of jazz music in advertising, marketing, and branding. Other publications include “Freedom of Choice: Jazz, Neoliberalism, and the Lincoln Center” (Popular Music and Society 38), “Rebels and Volkswagens: Advertising, Charles Mingus, and the Commodification of Dissent” (Black Music Research Journal, forthcoming) “Improvise!™: Improvisation and the Aesthetics of Neoliberalism” (Critical Studies in Improvisation 9), and “Gender, Genius, and Rock and Roll in ‘Roy Orbison and Friends: A Black and White Night’” (Popular Music 30). He is currently working on a new collection of essays, co-edited with Dr. Ajay Heble, called Improvisation and Music Education: Beyond the Classroom (Routledge, forthcoming). Dr. Laver was a postdoctoral fellow with the ICASP project from 2011-2013. He completed his PhD in Ethnomusicology at the University of Toronto in 2011.