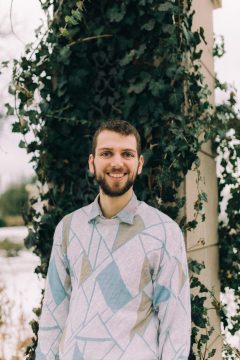 Sam Boer (M.A., Ryerson) is a musician, writer, and teacher born and raised in Guelph, Ontario. Dedicated to pushing boundaries in folk music, he has released his debut album Pigeon under the moniker Samson Wrote. Pigeon received funding from the Ontario Arts Council and was nominated for a Canadian Folk Music Award in 2019. He has toured Canada with several groups, most notable the art-folk collective The Lifers, performing at festivals across Canada including Hillside, Summerfolk, and Mariposa. When he is not recording or performing, Sam writes pieces for Exclaim!, leads music classes for young children, and provides PR and grant support for musicians and non-profits.