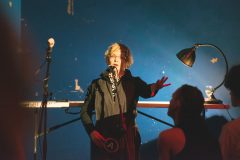 University of Victoria Faculty of Law

Sara Ramshaw was appointed Associate Professor at the University of Victoria Faculty of Law in 2017 following previous appointments at the University of Exeter (England) and Queen’s University Belfast (Northern Ireland). After receiving her B.A. (Hons) from the University of Toronto, Sara obtained both a LL.B. and a LL.M. from the University of British Columbia. She then clerked at the Ontario Court of Justice (General Division) and was called to the Bar of the Law Society of Upper Canada in 2000. Sara worked for the Ministry of the Attorney General at the Superior Court of Justice, Family Court in Toronto before commencing postgraduate studies at the University of London (Birkbeck College) in England. Sara’s doctoral thesis, completed in 2007, examined the legal regulation of jazz musicians in New York City (1940-1967) through the lens of post-structural theory informed by feminism, critical race theory and critical improvisation studies. During the 2008-9 academic year, Sara was a Postdoctoral Fellow with the Improvisation, Community and Social Practice (ICASP) project in Montreal. Her monograph, Justice as Improvisation: The Law of the Extempore, published by Routledge in 2013, was nominated for the 2014 Socio-Legal Studies Association (SLSA) Hart Book Prize.