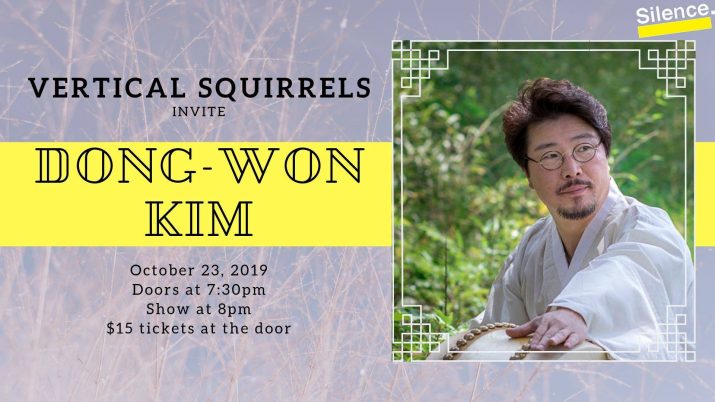 Guelph’s own Vertical Squirrels (including IICSI’s Daniel Fischlin and Ajay Heble, Lewis Melville, and Ted Warren) are hosting a residency at Silence through the Fall and Winter of 2019-20, featuring performances that highlight the group in improvised dialogue with special guests.

Dong-Won Kim is a Korean percussionist, vocalist, composer, and improviser. He has studied Korean traditional music since 1984, including farmers’ drumming and dance, shaman music, and Pansori accompaniment. Dong Won Kim is an internationally recognized master of his form who has performed at the United Nations General Assembly Hall as a member of Yo-Yo Ma’s Silkroad Ensemble Project. Dong-Won has taught at various institutions internationally including Harvard University, the Musikak-Ademie Basel, Switzerland and currently teaches music as a professor of Wonkwang Digital University in Korea.