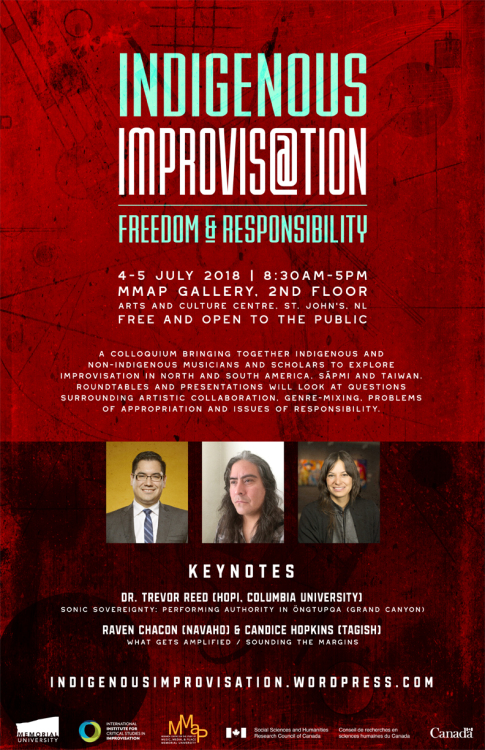 The international colloquium on Indigenous Improvisation will be held at the MMaP Research Centre, Arts and Culture Centre, in St. Johns, Newfoundland on July 4 and 5, 2018. Indigenous scholars and musicians from Canada, the United States, Taiwan, and Norway will present talks and discussions. The colloquium is free and open to the public, and takes place between 9 am and 5 pm each day.

The event will focus on the complex relationship of individual freedom and social responsibility in the context of artistic practice. Participants will address such questions as: To what extent and in what ways do they draw upon traditional elements when they improvise? How do Indigenous protocols play a role in their practice? How do inter-Indigenous exchanges work best? What are the challenges and synergies of intercultural (Indigenous/non-Indigenous) performance?

Indigenous performers, composers and song-makers have a long history of engagement with certain improvisatory traditions, including jazz, contemporary classical music, and song. At the same time, contemporary Indigenous music production is often rooted in specific traditions of one or more of the 500 First Nations in North America or one of the nine Sámi groups of Scandinavia, among thousands of other Indigenous peoples, of course. These “roots” might involve not only the use of traditional sonic elements but might cast such matters as lineage, ownership, stylistic borrowing, and social responsibility in specific ways that differ from Euroamerican-centric assumptions.  There are Indigenous traditional genres that are largely improvised or involve improvisation (e.g., Sámi joik, Inuit throat singing). There are many other contexts, however, where improvisation would be disrespectful.  These contexts require strictly accurate performance that replicates appropriate repertoire in ceremonial contexts. The “freedom” of humans is complicated by the recognition that songs in some Indigenous nations are received via dreams, visions, or non-human relations, and the rights to songs are given through inheritance, gift-giving or some other interpersonal relationship. There are strict protocols for such things as the use of certain instruments, or the proper ways of sharing repertoire, even in somewhat fluid traditions such as powwow.  These protocols present challenges for cross-cultural collaboration. In Indigenous contexts, song knowledge usually carries responsibilities. As Russell Wallace indicates, there is a responsibility to the song itself: “I, as a traditional singer, need to know that the music I share will not be used to sell beer or put into any other context that might bring harm to the songs” (Russell Wallace, Salish, 2017). The implications of these relational obligations for intercultural projects or even pedagogical workshops for culturally diverse participants are complex.  There is also a long history of appropriation, most famously the mass marketing and global use of such instruments as didgeridoo and djembe, or the compilation of Aboriginal (and other ethnic) “samples” that are marketed to the film industry in particular.  Every First Nation has protocols that relate to song and performance rights. Both within and beyond Indigenous communities, however, there are many debates about these issues.

Learn more about the Indigenous Improvisation Colloquium and the participating scholars and musicians on their website.