Workshop on South Asian Musical Traditions with Trichy Sankaran and Autorickshaw, Guelph ON 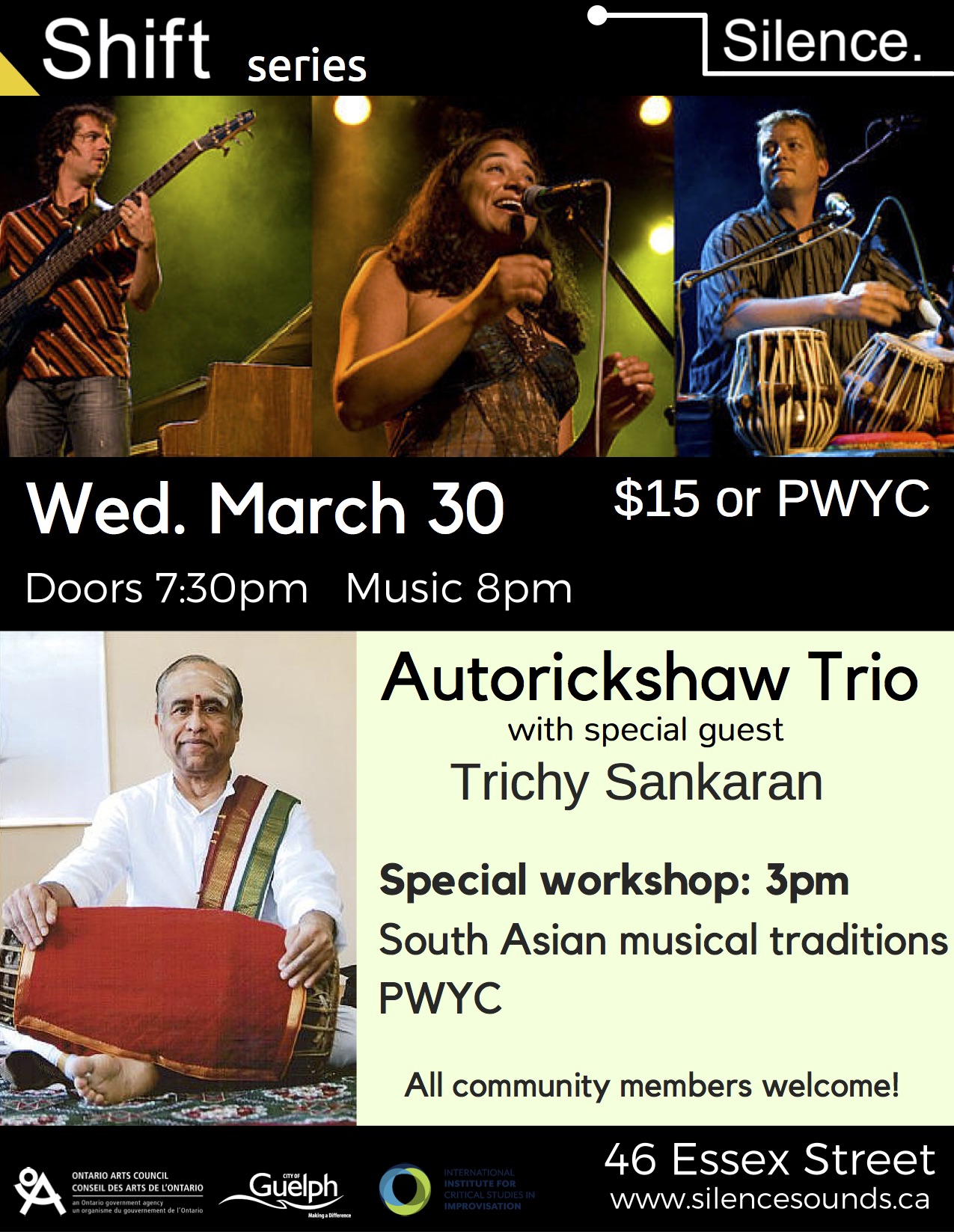 Professor Trichy Sankaran is a world-renowned percussion virtuoso, Indian music scholar and composer, and the founding director of Indian music studies at York University. Over the years, Prof. Sankaran has bridged eastern and western pedagogical styles and has influenced generations of students who have become noted performers, composers, and music educators themselves. He has made valuable contributions to many scholarly conferences across North America and has published two major books: one on the theory and techniques of South Indian classical drumming, and the other on the Art of Konnakkol (Solkattu).

Trichy Sankaran has performed at major festivals in India, South-East Asia, Europe, Australia and North America. In his 6 decades of concert experience in Carnatic music, he has accompanied all top rank artists of India. He has performed in jugalbandhis (North-South combo) with famous Hindusthani musicians. In addition to his usual traditional settings and numerous solo recitals, he has performed with Nexus, gamelan, jazz, electronic, African music ensembles and world drums, as well as his own group, Trichy’s Trio.

In January 2012, Dr. Sankaran received the most coveted honour of ‘Sangita Kalanidhi’ from the prestigious Music Academy of Madras. He is the first recipient of this award in the Pudhukkottai tradition of mrdangam playing.

Autorickshaw’s music lies on the cultural cutting edge, as contemporary jazz, funk and folk easily rub shoulders with the classical and popular music of India. Formed in 2003, Autorickshaw is one of the most intriguing acts on the world music and jazz landscapes, garnering 2004 and 2007 JUNO nominations for World Music Album of the Year, winning a Canadian Independent Music Award in 2005, and a John Lennon Songwriting Competition Grand Prize in World Music and the CAPACOA Touring Artist of the Year award, both in 2008.

“The ensemble consists of Canada’s most exciting and musically interesting musicians…and when their forces are combined, the results are utterly unique and musically pioneering”. -Daniel Ariaratnam, The Record

Autorickshaw is committed to their role as music educators through school performances, lecture demonstrations, workshops and masterclasses on topics as diverse as jazz improvisation, south Indian and western vocal/choral technique as well as percussion from around the world.