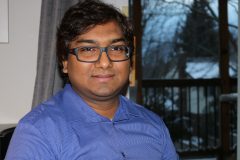 Muhammad Saiful Islam is doing his MA (Thesis Option) at the School of English and Theatre Studies in the University of Guelph. He holds MA in English Literature and BA (Honours) in English from the University of Dhaka, Bangladesh. Saif was a Lecturer at the Department of English in King Khalid University (KKU), Saudi Arabia. Before joining KKU in 2008, he taught in BRAC, Stamford, People’s, and Dhaka universities in Bangladesh. His scholarly articles appeared in refereed journals including Journal of Postcolonial Cultures and Societies, Romanian Journal of English Studies and Dhaka University Studies. His poems appeared in The British Council Book of Emerging English Poets from Bangladesh (2001) and Maps and Metaphors, Writings by Young Writers from Bangladesh and United Kingdom (2006). In Bangladesh, Indonesia, Thailand, and UK, in different conferences, 8 of his papers were presented. Saif rendered his poems in several events in India, UK, KSA, and Bangladesh. A part-time Cultural Correspondent for daily newspapers in his undergrad years, Saif took part in organising International Youth Summits in 2005 and 2006 in Dhaka as part of the Connecting Futures Program of the British Council that provided a platform for young people from Bangladesh, India, Sri Lanka, Pakistan, and the UK.