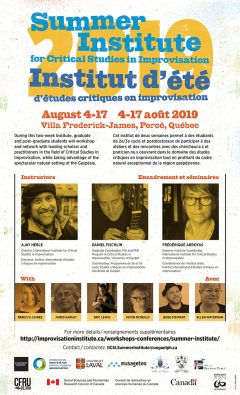 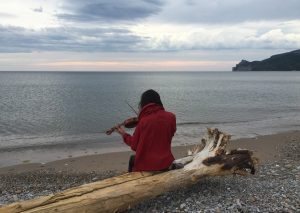 Confirmed facilitators for the Summer Institute include: 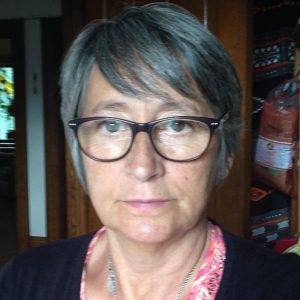 Frédérique Arroyas is an associate professor in French Studies at the University of Guelph. Her research focuses on the intersections of music and literature in contemporary French fiction, the heuristic use of musical models, and the mediation of musical meaning in literary works. She is the author of La lecture musico-littéraire (2001) and articles that span French literature, women’s studies, theatre and music. She is currently developing methodologies for practice-based research in the field of language acquisition and improvisation that will forge new insights into the nature of language acquisition. Dr. Arroyas is co-editor of the Journal Critical Studies in Improvisation/Études critiques en improvisation and Revue Synergies Canada. 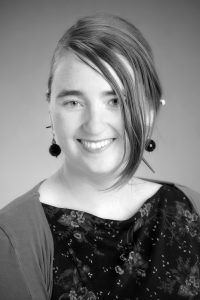 Rebecca Caines is a community-engaged artist/researcher, working in performance, sound and installation.  She is the Regina site coordinator for the 2.5 million dollar SSHRC Partnership, “The International Institute for Critical Studies in Improvisation,” and is an Associate Professor in Creative Technologies at the University of Regina. Her research examines improvisation, interdisciplinary, emerging technologies in social practice art, memory and performance, and site-specific art. Her  work has been shown and published internationally, and she has facilitated large scale community projects in Canada,  Australia, Northern Ireland, China and the Netherlands, working with diverse community collaborators. She was an ISEA  FUSE artist in residence in Wuhan, China in 2016, working with long-term collaborator John Campbell and the local community, on the project “Improvised Remembering”. Caines is co-editor, with Ajay Heble, of The Improvisation Studies Reader: Spontaneous Acts (Routledge, 2015) and is currently working on a monograph for Temple University Press entitled “Fragile Devices” exploring community-based improvisation tactics and strategies in socially-engaged art projects. 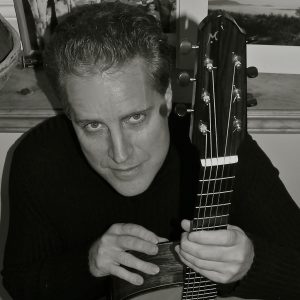 University Research Chair Daniel Fischlin is a leading Canadian humanities researcher who has produced important cross-disciplinary work, including some twenty books with a wide variety of international presses. His most recent books include (with Ajay Heble and George Lipsitz) The Fierce Urgency of Now: Improvisation, Rights, and the Ethics of Cocreation (Duke UP) and a co-authored book with Martha Nandorfy entitled The Community of Rights • The Rights of Community (Oxford UP), the third in a trilogy of books co-written with Dr. Nandorfy on rights issues. Fischlin has received several major awards for teaching excellence and is to date the only winner from the Humanities of the prestigious Premier’s Research Excellence Award. As a musician and community organizer, he chairs the Board of Silence, a community artspace in Guelph, and is also the founding director of the newly launched MA/PhD program in Critical Studies in Improvisation at the University of Guelph. 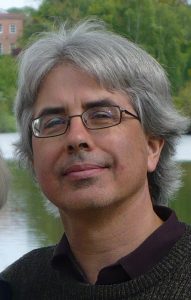 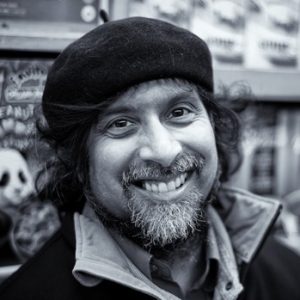 Ajay Heble is the founding Director of the International Institute for Critical Studies in Improvisation (IICSI), and Professor of English in the School of English and Theatre Studies at the University of Guelph. His research has covered a full range of topics in the arts and humanities, and has resulted in numerous books, articles, or chapters. He is the founding Artistic Director of the award-winning Guelph Jazz Festival and Colloquium, and a founding co-editor of the peer-reviewed journal Critical Studies in Improvisation/Études critiques en improvisation (www.criticalimprov.com). Heble is also an accomplished pianist who, with Daniel Fischlin, records and performs with the improvising quartet, The Vertical Squirrels. 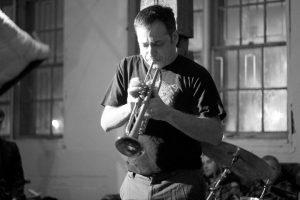 Eric Lewis is the director of the Laboratory of Urban Culture for the Public Life of Arts and Ideas at McGill University, where he is a professor of philosophy. His research focuses on the philosophy of improvised arts. He is also an active improviser on brass and electronics. 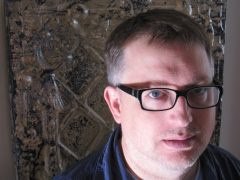 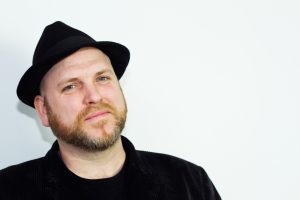 Jesse Stewart is a composer, percussionist, visual artist, researcher, and educator. His music has been documented on over twenty recordings including Stretch Orchestra’s self-titled debut album, which was honoured with the 2012 “Instrumental Album of the Year” Juno award. He has performed and/or recorded with musical luminaries including Pauline Oliveros, Hamid Drake, William Parker, Joe Mcphee, David Mott, Dong-Won Kim, and many others. His music has been performed at festivals throughout Canada, in Europe and in the United States and he has been widely commissioned as a composer and artist. His writings on music and art have appeared in such journals as American Music, Black Music Research Journal, Contemporary Music Review, Intermedialities, and in numerous edited anthologies. 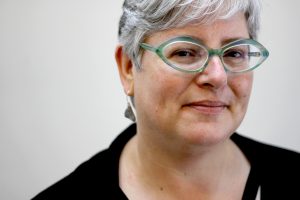 Ellen Waterman is Professor and Helmut Kallmann Chair for Music in Canada at Carleton University. Previously she taught at Memorial University of Newfoundland where she was IICSI site coordinator. She is both a music scholar and a flutist specializing in creative improvisation. Her interdisciplinary research interests range across improvisation, contemporary performance, gender, sound and ecology. With Gillian Siddall, she is co-editor of Negotiated Moments: Improvisation, Sound and Subjectivity (Duke 2016). Her books on acoustic ecology and sound art include The Art of Immersive Soundscapes (with Pauline Minevich, 2013) and Sonic Geography Imagined and Remembered(2002).  She is a member of ~spin~ duo (with James Harley) exploring the intersections between acoustic/electro-acoustic performance and real time multi-channel sound diffusion. Their multi-channel recording Like a ragged flock…was released in 2015 (Canadian Music Centre and iTunes). Ellen is founding co-editor of the online, peer-reviewed journal Critical Studies in Improvisation/Études critiques en improvisation. With Rob Jackson, she developed the Improvisation Tool Kit at www.improvcommunity.ca drawing together information from several community-engaged projects to create a free resource for teaching improvisation. Ellen is site coordinator for IICSI-MUN which offers annual activities including a postdoctoral fellowship, a public speaker series Improvising Spaces, and an improviser-in-residence program. She also participates in a multi-site research project to develop the Adaptive Use Musical Instruments (AUMI) software interface, a musical instrument that enables people who have very limited controlled (voluntary) movement to independently engage in music making. Her work on AUMI may be found at https://voices.no/index.php/voices/article/view/834/739. Ellen’s current book project is a comparative ethnography of twelve Canadian music festivals, Sounds Provocative: The Ecology of Experimental Music Performance in Canada, www.sonicecology.com.

There is a $500 fee for participants attending the Summer Institute. Students who wish to take the course for credit will also be required to pay additional tuition fees. In addition, participants will be required to pay for their own travel to and from the Institute, as well as for meals during the Institute (kitchen facilities available). Lodging will be provided at no additional cost.

Please note that is a tentative schedule, subject to change.

In addition to the schedule listed here, each morning will begin with an improvised musical opening. Each evening will provide space for open collaboration and jam sessions.

For questions or more information, please reach out to us at [email protected].