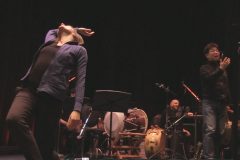 When Rivers Meet, performance and interviews

From August 15th, 2014 through January 15th, 2015, Improviser-in-Residence Dong-Won Kim (along with his wife, Ju-Hyung), were embedded in Guelph and Waterloo Ontario, connecting our communities with profound experiences of improvised music making and dance providing memorable, positive moments with participants and the broader community through experimentation and reflection. Kim presented his work throughout the residency and as part of a final, culminating performance When Rivers Meet with community partners .