Home » Library » Think Piece: Oku’s Sounds: Anthony Braxton and Musical Improvisation in Dionne Brand’s What We All Long For 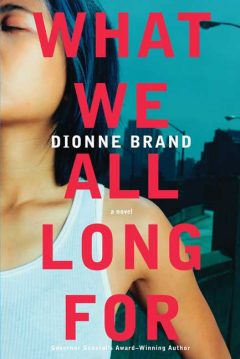 Think Piece: Oku’s Sounds: Anthony Braxton and Musical Improvisation in Dionne Brand’s What We All Long For

From influencing the meter and rhythm of her verse to the “instrumental motif” and the “various lexical inflections of instruments and instrumentality” (Miller 161) in her 2010 work Ossuaries, musical improvisation, both in form and in content, permeates Dionne Brand’s poetry. Improvised music plays an equally important role in her 2005 novel What We All Long For, which tells the intertwined story of four ethnically and racially diverse twenty-somethings living in downtown Toronto. For Kit Dobson, the novel “represents a generational shift in the politics of being in Canadian space” (88). The characters inhabit spaces and pursue economic independence that fall outside of traditional conventions and definitions of white, mainstream Canada. Because of their social and cultural backgrounds, the characters find themselves with “little belonging to either the Canadian nation or to their ancestral homes” (Dobson 88). Emily Johansen suggests that the characters craft a distinct form of cosmopolitan citizenship in order to mitigate the social and political alienation they experience; this new form of belonging “emphasizes mutability over authenticity” (49), thereby establishing an identity that allows for “multiple positionalities” (50). A recurrent theme throughout the novel is how the characters apply culture to reinforce this notion of fluidity and multiplicity, what Russian narratologist Mikhail Bakhtin has called the heteroglossia of the novel form (324). One of the four protagonists, Oku, a second-generation Caribbean-Canadian, projects his “politics of being” through a personally curated soundtrack. In this think piece, I detail how the musical practices of one of Oku’s selections (musical improviser, composer, and performer Anthony Braxton) provide a theoretical window from which to consider Oku’s place within and relation to multicultural Canada.

Throughout the narrative, Brand lists Oku’s tastes in music. It would be easy, and lazy, to label the majority of Oku’s musical selections as jazz. Much like the prevalent themes of multiculturalism and diversity in the novel, Oku’s diverse and eclectic musical selections reflect the heterogeneity and fluidity of black sonic cultural production.

His musical selections range from the improvisational and experimental sounds of John Coltrane’s “Venus,” to the modern and electronic tones of drum ‘n’ bass (though never mentioned specifically, I would suggest Roni Size/Reprazent’s “Brown Paper Bag” as indicative of this genre), and include more traditional and conservative modes of black sounds such as Charlie Rouse’s “When Sunny Gets Blue” and Billie Holiday’s “You’ve Changed.” The panoply of musicians and song titles that Brand references includes one in particular that enhances the idea of multiplicity and heterogeneity.

The musical practices of improviser-composer Anthony Braxton sonically amplify Oku’s projection of a multicultural identity. Braxton is a member of the Association for the Advancement of Creative Musicians (AACM), a black artistic collective dedicated to the support and performance of “original and creative music” reflective of a wider range of black musical styles, genres, and eras. A quick sampling of Braxton’s oeuvre reveals pieces easily identifiable as free improvisation, to works that align with post-tonal compositional practices.

Likewise, Braxton has shown a high-degree of comfort with historicist musical styles such as marching-band music and ragtime to writing and performing music that calls for unique instrumental combinations.

Conversing with music critic John Corbett, Braxton foresees the “marketplace alignment” of black musical culture as constructing “an idea of ‘blackness’ that would be more limiting than equal” (126). From Braxton’s perspective, historically-informed categories and definitions of black music crush the “composite aspirations of the music” (126). Aesthetic categories and labels assigned to black music not only represent the ideologies of outside forces, but also place a yoke on black creativity and musical practices. Graham Lock views the variety and diversity of Braxton’s compositions and performances as an attempt to challenge these constructed notions of blackness and advocate for the recognition of a “black creative tradition that is multiform, heterogeneous, and open-ended” (183). Braxton and his compositions put forth that black creative music is constantly changing and can draw from a wide array of musical styles and influences.

Oku’s mediation of his identity through sound reflects Braxton’s aesthetic of what poet and critic Nathaniel Mackey defines as “multiformity” (244). By listening to music that reaches across the borders and limits of genre and style, Oku sonically suggests a social identity that counters what Heather Smyth views as the dependency of Canadian multiculturalism on “an understanding of ‘difference’ that sees racial and ethnic identities as fixed, historical, and discrete categories” (276). Oku’s musical tastes fall outside the parameters of distinct genres or eras of black music; indeed, his musical repertoire suggests a self-constructed identity that exceeds conventional constructions reliant on geography or historical narratives. Oku’s eclectic musical tastes become more apparent when juxtaposed with his father’s musical selections. Fitz prefers Motown and reggae, genres and styles that are more neatly defined. Whereas Fitz sonically aligns within a set of restrictive aesthetic categories, Oku finds comfort in music with African diasporic sensibilities, which, as Frantz Fanon asserts, defy “congealed, petrified forms” (Wretched of the Earth 175). Oku’s preference for more progressive and modern sounds reflects his own view of his parents “as people who somehow lived in the near past and were unable or unwilling to step into the present (Brand 190). This divide in musical tastes reinforces Oku and Fitz’s disagreement about matters of employment opportunities, living arrangements, and community alignments.

Through his music, Oku puts forth a form of sonic identity that matches his own professional and personal aspirations. He steps beyond neat and tidy external and internal conceptions of black identity. One sees moments over the course of the novel where Okutransgresses neatly defined constructions of identity. Oku is a university graduate pursuing a master’s degree in English at the University of Toronto, who sustains relationships with old friends that have chosen less-than-legal paths to success. At certain points in the novel he evinces a fluency in black urban vernacular slang to project an image of toughness, while also sonically projecting “all of the mathematical calculations of his love” toward Jackie through the music of Dexter Gordon, Anthony Braxton, and Cecil Taylor (Brand 185).

Molly McKibbin sees the characters of What We All Long For as devising their “own space(s) within the city to make a genuine claim of home” (502). The “easy malleability” and “active negotiation” (504) of Toronto by the novel’s main characters disrupts the social and geographic barriers of the city, which throughout the novel Brand describes “as a set of obstacles to be crossed and circled, avoided and let pass” (32). The characters of the novel view the design, infrastructure, and physical layout of the Greater Toronto Area as unwelcoming and as inhibiting their social mobility. Oku’s preference for the improvisational music of Anthony Braxton reflects Oku’s desire to project his “voice,” and mirrors the novel’s broader theme of the characters wishing to self-fashion an identity that mirrors their own individual experiences in the multicultural landscape of Toronto. A discussion of improvised music in What We AllLong For can extend well beyond the music of Anthony Braxton and easily exceed the parameters of this post; however, I hope that this piece will be the springboard to a larger examination of the presence of black improvisational expressive culture in Brand’s novel.