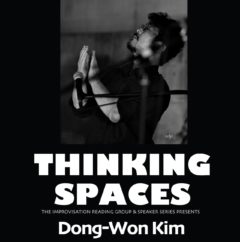 Since 1984, Kim Dong-won has learned various traditional percussion music, such as farmer’s drumming and dance, shaman music, Pansori accompany, and music theory. In 1987, he was a political prisoner, sentenced for playing music at the funeral ceremony of Lee Seok-Gyu, who was killed by policemen in a pro-democracy protest against the Korean military dictatorship. From this experience, he thought more deeply about society and art. That was the turning point of his life; he began to study traditional music more profoundly as a search for the truest methods of communication. During his work for the Samulnori Hanullim Organization as director of Research & Education (1994-2004), he wrote teaching material about Korean traditional music, as well as children’s books, e.g., “The Story of Samulnori” (a creative story about the origins of Samulnori). He has performed in Europe, the U.S.A., Japan, and many other countries, especially as a member of “The Silk Road Ensemble,” led by cellist Yo-Yo Ma. As an innovative improviser, he performed with many brilliant musicians, such as; Vertical Squirrels, Jesse Stewart, William Parker, James McGowan, Mei Han, Randy Raine-Reusch. And he took a new roll as a musical guide in a documentary film “Intangible Asset Number 82″(2008). This film has been invited by many renown international film festivals and won an award in Durban International Film Festival as “The Best Documentary of 2009”.