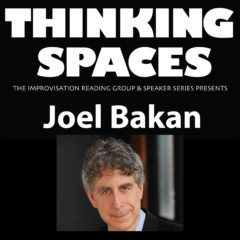 This Thinking Spaces talk, with guest Joel Bakan, took place on Nov. 6, 2020. For this talk, Joel Bakan discusses his new film and book, “The New Corporation.”

Joel Bakan is an author, filmmaker, and professor of law at the University of British Columbia. His work examines the social, economic, and political dimensions of law, and he has published in leading legal and social science journals and the popular press. Bakan has won numerous awards for his scholarship and teaching, worked on landmark legal cases and government policy, and frequently served as a media commentator. Joel Bakan recently released his new film and book, “The New Corporation: The Unfortunately Necessary Sequel” and “The New Corporation: How ‘Good’ Corporations are Bad for Democracy.”

This event was co-presented with the Gordon S. Lang School of Business and Economics.