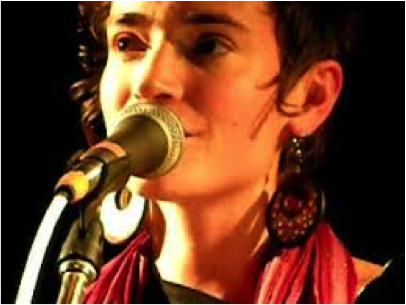 Moe Clark  is a multidisciplinary Métis artist, looping pedal mistress, spoken word poet, educator, artistic producer, public speaker, and activist. Late in November, she spent a week’s residency at London, Ontario’s VibraFusionLab, exploring the facility’s various vibrotactile systems and ending with a public performance. Moe Clark facilitates writing, spoken word performance, and looping pedal workshops in high schools, communities and with young Aboriginal peoples with a basis for de-habitualizing speech and deepening personal and collective awareness. In 2010 she was chosen as Leonard Cohen Poet in Residence (Westmount High School, 2010) and has since worked with the Quebec Writers’ Federation + The Centre for Literacy: Writers in the Community program to facilitate workshops in high schools and other facilities. On February 14 of this year she released the CD Butterfly Ashes to mark the annual day of action for Canada’s missing and murdered indigenous women. She writes: “Butterfly Ashes portrays the vulnerable connection between language and meaning, between media and truth, between the migratory patterns of Monarch butterflies and the historical nomadic routes of aboriginal women and now the contemporary roads they now travel down. Through an invocation of the word ‘Squaw,’ we call on the spirit of truth, often silenced or betrayed, and welcome in healing and understanding for the reality faced by so many aboriginal women and their families.”